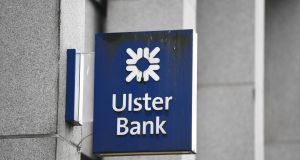 Executives from Ulster Bank will be quizzed by TDs and Senators on plans for distressed mortgages and staff as lender winds down Irish business. Photograph: Aidan Crawley/EPA

Executives from Ulster Bank will be quizzed by TDs and Senators on plans for mortgage holders in difficulty and what will happen to staff amid the financial institution’s withdrawal from the Republic.

Fianna Fáil TD John McGuinness, the chairman of the Oireachtas Joint Committee on Finance, said representatives from the bank have agreed to attend a meeting next Tuesday.

It comes as the group’s UK parent NatWest said it will begin a “phased withdrawal from the Republic of Ireland over the coming years that will be managed in an orderly and considered manner”. Ulster Bank has 88 branches and 2,800 employees.

An internal announcement informed staff that there will be “no compulsory departures from the business this year”.

Ulster Bank CEO Jane Howard said on Friday that it remains important that borrowers who are facing financial difficulties as a result of the Covid-19 crisis to engage with the bank on finding solutions. It is likely that the bank will be left managing these loans for some years as it continues its wind down.

Mr McGuinness said members of the committee will want to ask the bank’s executives about their plans for selling their loan portfolios, in particular any distressed mortgages.

He referred to mooted deals to buy Ulster Bank’s performing loans but said “some consideration has to be given by Government and the banks as to what’s going to happen mortgage holders and loan owners that are in difficulty”.

Mr McGuinness questioned if there will be an insistence that they be sold on to what he described as an “ethical fund”.

He also said that it was not known at this point what will happen with Ulster Bank’s staff and the branches around the country. Mr McGuinness argued that there’s a “considerable amount of work that has to be done by Ulster Bank to ensure stability within the market place and the passing on of their customers to the appropriate pillar banks”.

The finance committee will also hear from representatives of the Irish Financial Services Union which represents workers in the sector.

9 Has Dublin built too many luxury apartments?

10 Irish biotech Amarin gears up for drug launch in Europe