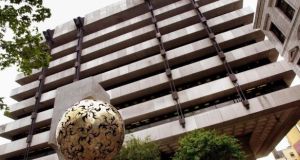 The Central Bank has approved Lloyd’s of London insurer Beazley’s request to set a set up a European hub in Dublin. Photograph: Matt Kavanagh

Lloyd’s of London insurer Beazley has secured approval from the Central Bank to set up a European hub in Dublin, giving it continued access to the European Union market as financial firms prepare for Brexit.

Beazley established a reinsurance business in Ireland in 2009 when the State was grappling with the financial crisis and overheads were low. The company expects to grow its Irish employee base as a result of the new authorisation from 6 currently to 24 over the next three years, according to sources.

The granting of a European insurance licence will be used by Beazley to provide specialty insurance products, including professional indemnity, management liability and cyber coverage.

The news comes three weeks after the regulator authorised UK-based Chaucer, another player in Lloyd’s, the world’s leading insurance market. Chaucer was bought by US group Hanover Insurance in 2011 for almost £292 million (€332 million).

EY, the accounting and consulting firm, said earlier this week that Dublin and Frankfurt are leading the race among European cities to lure financial firms seeking to move activity from London as the UK plans to exit the EU by March 2019. Some 19 of 59 companies that have indicated they are moving staff or operations have chosen Dublin, marginally ahead of Frankfurt, at 18, and Luxembourg, at 11, according to EY.

Still, Luxembourg has had some high-profile wins in the insurance space, with giants as the UK’s RSA, New York-based AIG and Hiscox of Bermuda choosing in recent months to locate their European bases in the Grand Duchy under Brexit.

Some commentators have said that the Central Bank has put off some firms weighing Dublin up against other cities by insisting upfront in initial meetings that they establish a “substantive presence” in Ireland, where the “mind and will” of an entity is based in the State, to gain authorisation.

However, John Cronin, partner and head of the Brexit group at corporate solicitors firm McCann Fitzgerald, said that a number of significant financial institutions have been complimentary about the regulator’s approach.

He said that a number of firms have concluded “that regulatory arbitrage is not for them as they acknowledge that it is not very likely that EU supervisors will tolerate any such arbitrage between different EU member states,” he said.

“Ireland’s stance against any regulatory arbitrage earlier this year is increasingly regarded as the right view.”

1 How much state pension will I get next year?
2 Hurrah for the companies giving staff more time off
3 Investors unnerved by Brexit, Covid-19 and US election jitters
4 RTÉ to seek 70 voluntary redundancies as ‘large costs’ beckon in 2021
5 Mortgage drawdowns fall by almost a third
6 Where is the creative, effective advertising for face masks?
7 How to avoid a communication breakdown
8 ‘French people are pretty relaxed. They don’t pander to scaremongering or hysteria’
9 Tesco takes to the skies with home delivery by drone
10 Stoneweg to develop 397-unit co-living scheme on Cork St
Real news has value SUBSCRIBE