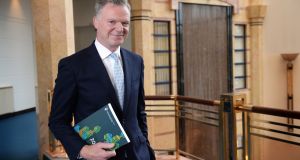 NTMA chief executive Conor O’Kelly: he has said the NTMA is well positioned to increase borrowing in the coming years due to the economic disruption caused by coronavirus. Photograph: Dara Mac Donaill

The National Treasury Management Agency (NTMA) plans to sell up to €4 billion of bonds as early as Tuesday to help fund the State’s response to coronavirus.

The agency, which manages the national debt, has hired a group of banks to manage the sale of seven-year bonds, which it said “is expected to be launched and priced in the near future subject to market conditions”.

The NTMA did not say how much the syndicated bond sale was expected to raise, but market sources said it should bring in €3 billion to €4 billion.

The deal is expected to take place on Tuesday or Wednesday.

The NTMA said it had hired BNP Paribas, BofA Securities, Cantor Fitzgerald Ireland, Danske Bank, Goldman Sachs International Bank and JP Morgan to oversee the sale of the bonds, which will mature in 2027.

The agency typically only uses a club of banks for large transactions or when issuing new debt.

The NTMA, led by Conor O’Kelly, said last week that it was well positioned to increase borrowing activity in the coming years due to the economic disruption caused by the coronavirus pandemic.

Its previous objective of only raising between €10 billion and €14 billion has been abandoned as a result of coronavirus and the resulting costs to the State.

It plans to hold one syndicated bond issue in April and bond auctions in May and June. It will also hold three smaller Treasury Bill auctions over the next three months.

At the end of February the NTMA had €26 billion to fund this year’s €19 billion of bonds that fall due for redemption.

The final cost of Government efforts to deal with the crisis and the potential fall-off in tax receipts are not known at this stage. However last week the Central Bank warned that an expected €2.2 billion surplus this year was likely to morph into a €19.6 billion deficit, which equates to a €22 billion swing into the red.

Its calculation was based on €8.2 billion of additional spending on income and business supports, and €13.6 billion in lost tax receipts and additional welfare payments.

1 Should my mam wait for house prices to drop before buying?
2 Two prominent business leaders in planning row with neighbour
3 Cheers: Conor McGregor's whiskey races up the sales chart
4 ‘I’m so lucky to be in the Caribbean – a million miles from Derry Girls’
5 Joint accounts: if one of us dies, can the other access the money?
6 Battle for control of America’s mammoth utility industry set to intensify
7 ‘The recovery needs to be a full-scale economic renewal’
8 US ‘hard seltzer’ drink White Claw launches in Ireland
9 ‘I have a talent for justifying purchases’
10 Chris Johns: Past is another country when it comes to our post-pandemic future
Real news has value SUBSCRIBE