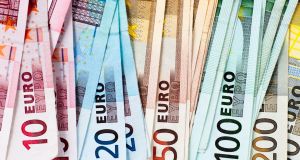 MMFs are mutual funds where banks, companies and governments can place money in the short term to get marginally higher income than putting cash on deposit in banks. Photograph: iStock

Irish-based money market funds, which housed €574 billion of assets at the start of the year, suffered 10 per cent investor withdrawals in March as companies and banks rushed to grab cash at the height of the Covid-19 global financial shock, according to a Central Bank paper.

Money-market funds (MMFs) are mutual funds where banks, companies and governments can place money in the short term to get marginally higher income than putting cash on deposit in banks. The funds are also an important source of short-term funding for such entities – and key to the flow of money through the economy.

The Republic’s international financial services hub is the domicile for 45 per cent of assets in MMFs, an area of significant regulatory reform in recent years, after the sector was rattled in 2008 by the implosion of the $62.5 billion (€52.7 billion) Reserve Primary Fund in the US, was caused by losses sustained on debt issued by Lehman Brothers.

Like banks, money market funds must have certain levels of cash, or what’s referred to as liquidity, available to meet potential withdrawals. Reforms that took effect in 2018 mean the most common type of Irish MMFs – known as LVNAVs (which stands for Low Volatility Net Asset Value) – must consider applying fees or restrictions on investors withdrawing cash if the entities can’t convert at least 30 per cent of their assets into cash within five days – or if more than 10 per cent of assets are redeemed by investors.

“Despite this volatility, no LVNAV in Ireland breached key regulatory thresholds that would trigger actions required by MMF regulation, though some funds were not far from doing so,” said the Central Bank paper, written by senior economist Brian Golden.

But while the new rules were set up to cater for potential breaches, including the ability to halt withdrawals or change the status of a fund, Mr Golden added that industry sources were concerned about how investors would react to such moves in stressed market conditions.

The period of heightened stress proved short-lived, as actions by central banks to pump trillions of euros into financial markets prompted companies and banks to put money in MMFs again. Still, the market hasn’t fully recovered from the March shock, according to Mr Golden.

“The return to pre-crisis conditions in money markets has been very slow, and liquidity ratios within Irish-resident MMFs remain elevated even as liquidity returns to money markets, reflecting concerns that this liquidity could suddenly disappear again if stress in other markets were to emerge,” he said.

However, there may be need for further reform of MMFs to make them safer, as the action of central banks in March was the main reason why some funds did not run into trouble, according to some European regulators.