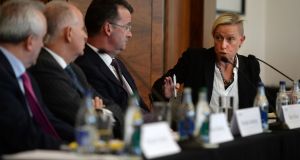 Speaking at a seminar hosted by Chartered Accountants Ireland (CAI) on Tuesday, Mr Cawley said that “in a more heavily regulated environment” the focus will be on following processes, rather than the objective of the role.

It will result in a profession manned by technicians as “judgment will go out the door,” he said.

A series of scandals, including the collapse earlier this year of UK construction group Carillion and implosion of retail chain BHS in 2016, has increased pressure on auditing firms on the other side of the Irish Sea.

Earlier this month, the UK Competition and Markets Authority said it would investigate whether the auditing industry – dominated by the so-called big four firms, Deloitte, EY, KPMG and PwC – should be broken up over their dominance and conflicts of interest between their business divisions.

Meanwhile, the world’s largest adviser to shareholders, International Shareholder Services, unveiled plans last week to track audit quality issues across Europe from next year, which could result in audit partners and firms involved in accounting disputes being named in their reports for investors.

In Ireland, the CAI’s professional standards unit was given the green light in August by the Director of Public Prosecutions to resume a disciplinary tribunal into the work of Anglo Irish Bank’s one-time auditor, EY, after the last of a number of criminal trials relating to the failed bank concluded. The DPP asked the body to hold off on disciplinary hearings in 2011 pending the outcome of the criminal cases.

A preliminary report carried out by former comptroller and auditor general John Purcell in 2011 for the accountancy body said there was “prima facie” evidence that EY had a case to answer in relation to major errors on Anglo’s 2008 accounts.

“Regulation isn’t going away,” Kevin Prendergast, chief executive of the Irish Auditing and Accountancy Supervisory Authority, told the seminar. “[There’s a] systemic importance to audits, that’s why it’s regulated and why regulation is going in one direction.”

While the conference heard from various speakers that mounting regulation is driving “the brightest and the best” into other industries, Mr Prendergast said: “It’s not just auditors, folks. That’s the modern world . . . for everybody who holds important positions doing important work, the old days are gone. People will be held to account.”

1 Should AIB compensate me for upsetting letter on arrears?
2 Poll on second election, concerns over Irish pension gap, and Ireland’s rich list
3 Chris Johns: The Johnson administration will spend, and needs a quiet Treasury
4 Tax shifts won’t drive multinationals out of Ireland - Moody’s
5 How to turn racists’ genetic arguments against them
6 Clean energy’s dirty little secret on wind turbines
7 Brendan O’Connor is back in the RTÉ big league
8 Sinn Féin wants Irish unity, but do the economics make sense?
9 Maeve Culloty: ‘My energy comes from the challenge’
10 High time: Netherlands moves to clean up absurd cannabis policy
Real news has value SUBSCRIBE