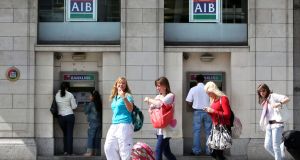 Irish banks are likely to cut the equivalent of 7,650 positions in the next five years, according to Deloitte Ireland. Photograph: Crispin Rodwell/Bloomberg

Irish retail banks are likely to cut up to 30 per cent of jobs – the equivalent of 7,650 positions – in the next five years as the Covid-19 crisis shifts more transactions online and lenders seek to rein in costs in an era of ultra-low interest rates, according to Deloitte Ireland.

In a new report on the future or banking, the consultancy firm said the overnight switch by customers to digital banking during the coronavirus pandemic would accelerate their IT transformation. However, the scale of cost-cutting coming down the tracks would lead to shareholder tension, it said, as the Government continues to hold major stakes in AIB, Bank of Ireland and Permanent TSB following crisis-era bailouts.

“Profitability will remain the key challenge for banks. The lower-for-even-longer interest rates and evaporation of traditional fee income streams will depress returns, and aggressive cost control may be the only real lever for banks to improve their profitability in the short to medium term – while they are also responding to the operational and strategic challenges posed by Covid-19,” said David Dalton, head of financial services at Deloitte Ireland.

“In light of these challenges, Irish banks are likely to continue trading at large discounts to book value, and a tension will exist with shareholders as the banks seek to balance profits and doing the ‘right thing’ by supporting their communities as the recovery gets under way.”

Deloitte’s prediction that 20-30 per cent of bank jobs cuts follow on from Ireland’s five main banks having slashed staff numbers by 45 per cent since the 2008 crash to about 26,500 today. It came as the size of the banks’ combined loan books shrank by more than 50 per cent with the sale of unwanted and problem assets and as borrowers repaid loans at a faster rate than taking on new debt.

Analysts at stockbroker Davy have forecast that the Republic’s three surviving taxpayer-rescued banks are on track in the coming weeks to report a combined €525 million of net losses for the first half of 2019 as the Covid-19 economic shock hits new lending and forces banks to set aside money to cover an expected surge in bad loans.

Bank of Ireland, AIB and Permanent TSB are set to post €1.03 billon of bad loan provisions for the period, according to Davy, as the industry pushes into loss-making territory for the first time since 2013.

The banks have also seen their net interest margins – the difference between the average rates at which they fund themselves and lend to customers – squeezed in recent months as customers ramp up savings at a time when the banks already have too much in deposits and face negative rates when placing excess cash with the European Central Bank.

The losses come as banks have begun to engage with tens of thousands of customers who availed of temporary payment breaks of up to six months during the crisis, in order to assess what borrowers will not be able to return previously-contracted regular payments and will need their loans to be restructured.

“Engagement with affected borrowers will limit any build-up of [non-performing loans in the second quarter], and we are encouraged by recent preliminary data from the Banking & Payments Federation Ireland that only 60 per cent of those availing of the first three-month payment break have extended this further,” said Davy analysts Stephen Lyons and Diarmaid Sheridan.

1 In this strangest of recessions, what happens next for Ireland?
2 Michael O’Leary is the boss you want to lead an airline out of crisis
3 Bank of Ireland sees about 2,000 staff apply for voluntary redundancy
4 Estée Lauder staff at Dublin airport plan further strike action
5 Best Covid-19 ‘influencers’ will avoid hectoring
6 Should I switch bank now with Ulster Bank at risk of closing?
7 Fortnite owner signs multimillion deal to buy Irish ‘kidtech’ firm
8 The wealth of the Irish – how do your assets match up?
9 Ireland’s Covid-19 economy in five graphs
10 EY Entrepreneur of the Year: nominee profiles
Real news has value SUBSCRIBE