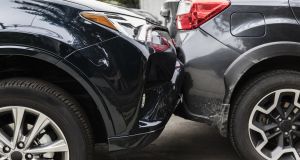 The cost of motor insurance claims fell by 2.5 per cent between 2009 and 2018 but premiums rose by 42 per cent, according to a Central Bank report which also revealed that insurers made an average of 9 per cent profit last year.

The first comprehensive study of premiums and cost claims in Ireland appears to cast doubt on longstanding industry claims that the higher cost of car insurance is the result of spiralling payouts and increased claims, resulting in low profitability.

The disparity is even starker when looking at the last five years. The report found that while the average cost of claims per policy rose by 14 per cent between 2013 and 2018 average premiums rose by 62 per cent.

The Central Bank’s Private Motor Insurance Report of the National Claims Information Database also revealed that the industry here generated an average operating profit of 9 per cent last year, nearly twice the level of profitability seen in the UK.

Another area of focus was the various channels through which settlements are made, which revealed the relatively high legal costs involved when claims end up in the courts.

The report identified three broad channels through which claims are typically resolved; through the insurers themselves; through the Personal Injury Assessment Board (PIAB); and as a result litigation.

Between 2015 and 2018, over a half of all injury claims were settled directly by insurers while 31 per cent were settled through litigation with the remaining 16 per cent of cases through PIAB.

The average compensation achieved in direct settlements was just under €12,000 with average legal cost estimated at 12 per cent or €1,385 of the total.

The average settlement achieved through PIAB was €22,631 with average legal costs put at just €753, 3 per cent of the total.

However, when it came to litigated settlements, the average compensation was €45,390 with average legal costs put at €23,031, more than 50 per cent of the settlement. The industry has long complained about the cost of payouts made through the courts.

Minister of State with responsibility for Financial Services and Insurance Michael D’Arcy said the report shows the insurance and legal sectors are both culpable for the difficulties over the last number of years with the price of motor insurance.

“ It appears that insurers engaged in under-pricing in the early part of this decade and then increased premiums beyond levels that were needed to cover losses over parts of the period, particularly between 2014 and 2017, and are now making significant profits as a result,” he said.

Several groups called on the Government to fast-track the establishment of a new judicial council, which would pave the way to new guidelines on the size of awards.

In its report, the Central Bank said there was an internationally observed underwriting cycle, typically lasting up to 10 years.

“This cycle, with peaks and troughs in premiums, reserves and profitability, is a feature of all insurance markets,” it said.

High profitability tends to attract new entrants into the market or existing entrants to supply more, it said. These competitive pressures have the effect of pushing premiums and profitability down, even pushing firms into loss-making territory.