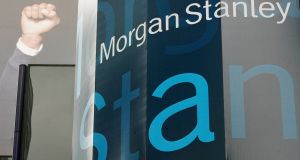 Morgan Stanley says it is ‘disappointed’ in the finding and intends to appeal against the decision. Photograph: Lucas Jackson/Reuters

Morgan Stanley has received a €20 million fine from France’s markets regulator for allegedly manipulating the price of government bonds in 2015.

According to a decision published on Tuesday by the Autorité des Marchés Financiers, London-based traders at the bank “aggressively” purchased futures contracts linked to French bonds in order to cause an “abnormal and artificial” increase in the price of French and Belgian bonds it held.

“These acts also constituted price manipulation through the use of a form of deception or contrivance, since the [futures] acquisition was inconsistent with the overall strategy of the European government bonds desk and had the effect of giving other participants a distorted picture of the state of the French sovereign bond market,” the AMF’s enforcement committee said in a statement.

Morgan Stanley said it was “disappointed” in the finding and intended to appeal against the decision.

“The activities in question were undertaken in accordance with market practice and as part of the firm’s role and obligations as a market maker and Morgan Stanley remains confident that it has acted in the best interests of the market and its clients,” the bank said in a statement.

The trades in question took place on June 16th, 2015, at a time when fears that Greece might leave the euro zone were fuelling sharp swings in bond markets, including in Morgan Stanley’s positions. – Copyright The Financial Times Limited 2019