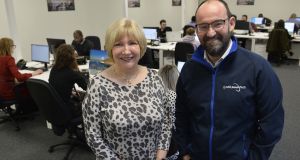 A Northern Ireland-based software company operating in the insurance market has created 40 new jobs in Dublin after moving its Irish operations to Swords due to uncertainty over Brexit.

MCL InsureTech, the name behind online insurance brands Its4women, 25plus and Boxymo, said it decided to make the move in order to ensure it can access 500 million potential customers in the single market.

It also said the move would ensure it can easily manage its Irish customer-base without the restriction of any Brexit-induced regulations.

The new positions will span director level to contact centre staff including management and team leader roles in the customer experience department. All posts will be full-time and will represent an investment of £3 million into the Irish economy.

The move also follows on from the company’s decision to successfully apply for regulation by the Central Bank, which allows its new Swords centre to become its own Irish entity, operating separately from its northern base in Coleraine.

The company already services about €70 million of gross written premium and 90,000 customers in Ireland.

MCL InsureTech managing director Gary McClarty said the opening of the Irish base will allow it to expand on its services and create more jobs in the Republic in the coming years.

“Although Brexit has created a lot of uncertainty in the insurance space, now that we are authorised by the Central Bank there are exciting times ahead for our business,” he said.

“We will be launching a range of new products and services that will hopefully benefit the Swords and wider area in terms of employment for now and in years to come.

“We have been very impressed with the calibre of the recruits in the Swords area and look forward to developing our business in Ireland.”

MCL InsureTech has been operating for 10 years from Coleraine where it serviced the whole of Ireland.

During that time it has tripled its staff numbers there to 102. Those staff will continue working from the Coleraine base, which will trade as normal following the opening of the Swords office.

Its4women was a product originally offered to drivers in the Republic but earlier last year MCL InsureTech expanded to offer access to drivers in the North with an aim to secure up to 10 per cent of the market within the next five years.

To hit that target, the company plans to create new roles and invest in its IT and contact centre business.

1 Ireland has EU’s most progressive tax system, study finds
2 Who are Ireland’s 17 billionaires?
3 Are there annual limits on inheritances or gifts to a child?
4 Doomsday Clock counting down remaining time left for civilisation
5 My father in a nursing home wants to gift me his house
6 Davos Diary: UCD prof goes batty, Ivanka hits town and Prince Charles takes the stage
7 Are you a Monica, Joey or Chandler when it comes to your data privacy?
8 ESRI tax study, Shanahan in Davos and Fallon & Byrne expands
9 Fianna Fáil may have just pressed the pause button on the property market
10 Fallon & Byrne gets permission for extension in Exchequer Street
Real news has value SUBSCRIBE