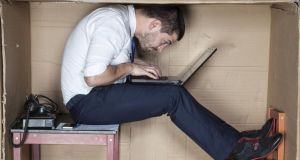 Microfinance Ireland offers four loan packages, ranging between €2,000 and €25,000, to start-ups or established businesses which want to scale up. Photograph: Getty Images/iStockphoto

Figures published by the lender showed 397 loans, amounting to €5.4 million, were approved last year, supporting either the creation or retention of 990 jobs.

Since it was established as part of the Government’s Action Plan for Jobs in 2012, Microfinance Ireland says it has lent a total of €17 million to 1,167 businesses, supporting 2,811 jobs.

Announcing the annual result for 2016, Minister for Jobs, Enterprise and Innovation Mary Mitchell O’Connor welcomed particularly the regional spread of loans, and noted that there were approvals in every county in 2016.

She noted that she had obtained additional State funding of €10 million this year for the agency.

Microfinance Ireland offers four loan packages, ranging between €2,000 and €25,000, to start-ups or established businesses which want to scale up, all with no fees or hidden costs. Interest is charged at either 6.8 per cent or 7.8 per cent Micro-enterprises are defined as businesses with fewer than 10 employees and annual turnover of less than €2 million.