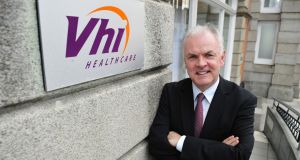 VHI chief executive John O’Dwyer said the insurer continued to strengthen its leadership in the marketplace in 2019, and grew its membership for the fifth year in a row. Photograph: Aidan Crawley

VHI, the State’s largest private health insurer saw pretax profits slide by 45 per cent to €51 million last year, due in part to a €57 million increase in claims payments.

According to VHI’s annual report for 2019, revenues from gross premiums increased by 3 per cent to €1.44 billion. “Total technical income” was down marginally, to €1.543 billion.

In his report, chief executive John O’Dwyer said the VHI continued to strengthen its leadership in the marketplace and grew its membership for the fifth year in a row. Customer numbers increased by 22,000 to 1.128 million.

He said 2019 saw a “material increase” in the cost of delivering healthcare. “Key factors driving the rise in costs are an ageing population, the ongoing adoption and availability of more high-cost complex surgical procedures, the provision of high-cost drugs for our customers, the increasing volume of medical claims in private hospitals and overall inflation in medical costs,” he said.

Mr O’Dwyer pointed out that the “pronounced increase in private hospital costs was mitigated to a limited extent by a reduction in public hospital costs”.

The VHI’s “special investigations unit continues to be the industry leader in relation to healthcare cost management on behalf of our customers,” Mr O’Dwyer said, adding that it delivered savings of €19 million to the group last year.

On the impact of Covid-19, a note attached to the accounts state: “VHI is continuously identifying, assessing and planning for a wide range of potential financial and operational outcomes as matters develop . . . Arising from these analyses, VHI is taking steps to sustain its service to our customers and to protect its business, in a prudent manner.”