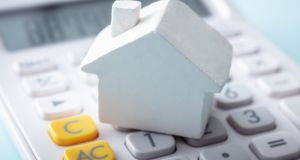 Households who received loans during the boom years between 2004 and 2008 accounted for 53% of all mortgage payment holidays, by far the highest grouping. Photograph: iStock

Taxpayers still galled at having to commit €64 billion to Irish banks during the financial crisis will be all too familiar with how the scale of losses stemming from the 2008 property crash was drip fed in a death-by-a-thousand-cuts fashion by lenders over half a decade.

But even as the State has succumbed in the past week to another period of economy-sapping Covid-19 lockdowns, it must come as a relief that the tone from banks in recent days is far more upbeat than earlier this year.

AIB and Bank of Ireland each said in trading updates that they had not seen much of a deterioration in their loan books in the third quarter of the year, signalling that they are comfortable with the full-year loan-impairment provisions guidance offered three months ago.

It points to combined loan charges of €2.5 billion to €2.8 billion for 2020, most of it already stomached in the first six months.

Both have been frontloading provisions even though it will be next year before household and business defaults are expected to peak.

Did the banks do a proper kitchen-sink job earlier this year, as analysts widely suspect? Or will they prove again to be victims of woeful optimism?

If Irish borrowers and banks come through the Covid-19 crisis in the next 15 months or so anywhere near the Goodbody Stockbrokers’ estimate that mortgage losses will be about a sixth of the 10 per cent of home loans written off during the financial crisis, there needs to be a serious rethink about the eye-watering level of expensive capital that European regulators force the State’s lenders to hold against mortgages.

Why, you might ask, should we care about that?

Because it’s the single biggest reason why Irish mortgage rates are notoriously among the highest in Europe. (It even ranks ahead of the fact that banks cross-subsidise their low-profit tracker loan books by charging higher rates elsewhere.)

Analysts at Deutsche Bank highlighted in a report last week that Irish banks must hold “substantially more” expensive capital in reserve against their mortgage books than elsewhere in Europe “as penance for the losses of the financial crisis”.

While capital levels have risen sharply globally in the past decade as a result of tougher regulations, Irish banks are sitting on much deeper cushions than most other European banks, according to debt ratings agency DBRS Morningstar.

Indeed, the level of money they must keep stashed away to cover shock losses is so onerous that it is getting in the way of the flow of ultra-low European Central Bank (ECB) rates to Irish borrowers.

In other words the actions of the all-powerful banking supervision part of the ECB are hampering the transmission of the same organisation’s broader monetary policy.

The average rate charged on new mortgages in the Republic over the 12 months to August was 2.83 per cent, compared to a euro area average of 1.35 per cent, according to Central Bank data.

The difference is adding almost €80,500 in over-the-odds lifetime costs to a €300,000 mortgage over 30 years, Brokers Ireland calculates.

Irish banks have to hold almost 2.5 times as much capital against a home loan than the European average, according to European Banking Authority data. This is a direct result of the perception of risk attached to Irish loans, drawn from crisis-time losses.

It means that Irish banks must put €46 in reserve for every €1,000 on loan against your standard three-bed semi. Your typical European bank has to set aside less than €20.

Banks in Spain, home to another property market implosion in 2008, are not that out of kilter with the European average, while the so-called risk-weighting of UK mortgages is less than a third of that in the Republic.

There are, of course, particular aspects of the Irish mortgage market that do not help to the risk-weightings of loans.

All told, those more than two years in arrears make up 3.5 per cent of all home loans.

This is a consequence of the still low level of repossessions in Ireland by international standards – for a number of reasons – despite talk for more than a decade of a tsunami of foreclosures that has yet to materialise.

But even allowing for this oddity the Deutsche Bank report said the level of capital that Irish banks are being forced to hold is “unfairly high”, especially given the pace at which banks have reduced their levels of problem loans in the past seven years, and how new mortgage lending rules have curbed new lending.

If proof were needed about how the Central Bank mortgage limits, introduced in 2015 to prevent another credit-induced property bubble, have done their job look no further than a piece of research published by the regulator last month on the take-up of Covid-19 loan payment breaks.

It found that households who received loans during the boom years between 2004 and 2008 accounted for 53 per cent of all mortgage payment holidays, by far the highest grouping. Those that took out lower loan-to-value and loan-to-income loans under the new rules were less likely than the average to seek relief.

If banks and borrowers get through the Covid-19 shock as well as analysts predict, European regulators need to allow for a recalibration of the risk-weighting of Irish mortgages – not least to reflect the fact that a third of loans out there, according to Goodbody, have been written under the new rules.

The last financial crisis taught us the painful lesson of what happens when banks are undercapitalised. Forcing banks to hold too much capital carries its own costs, resulting in borrowers being penalised through higher rates or reduced competition. Or both.