Nigerian prosecutors say they will seek extradition of two men 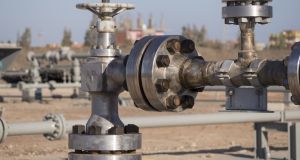 Nigeria is embroiled in a fight with Process & Industrial Developments (P&ID), which was founded by Irish investors Michael Quinn and Brendan Cahill, over a failed 2010 deal to develop a gas processing plant. Photograph: iStock

Irish authorities and AIB are being drawn into a high-profile international legal dispute between Nigeria and a company founded by Irish investors that is claiming $9.6 billion (€10.8 billion) for a failed contract.

Nigerian prosecutors said they would seek the extradition of two men from the Republic to Nigeria. They also said they were seeking information about funds sent to a Nigerian government lawyer that were transferred through AIB.

The African country is embroiled in a fight with Process & Industrial Developments (P&ID), which was founded by Irish investors Michael Quinn and Brendan Cahill, over a failed 2010 deal to develop a gas-processing plant. Nigeria now alleges the contract was won corruptly and the project was never meant to succeed. P&ID denies any wrongdoing.

The Nigerian anti-corruption agency has expanded its investigation into the deal by making formal requests for assistance from Irish law enforcement and the UK’s National Crime Agency, Ibrahim Magu, the head of the Nigerian agency, said in an interview with Bloomberg in London. He was one of more than a dozen government officials to speak to the news agency on Tuesday.

The latest developments may draw the Government into the dispute. An Irish citizen who worked for Mr Quinn has been arrested and charged in Nigeria and remains in custody, according to lead prosecutor Bala Sanga.

Nigerian prosecutors also said they had evidence of two bank transfers totalling $20,000 (€18,250) made by Dublin-based Industrial Consultants (International) Ltd – part of the P&ID group of companies – to Grace Taiga, a Nigerian government lawyer who oversaw the award of the gas plant contract. The payments, in 2017 and 2018, were made from an Industrial Consultants account at AIB and were purportedly for “medical costs,” Mr Sanga said in the interview.

A spokesman for AIB said the bank did not comment on individual accounts. A spokesperson for P&ID didn’t immediately respond to a request for comment on the latest allegations.

Ms Taiga’s lawyer denied that his client had been bribed.

The payments, along with Ms Taiga’s email records, showed a “long-standing relationship” between the government official and P&ID founder Michael Quinn, who died in 2015, and his partner Mr Cahill, Mr Sanga said. Ms Taiga pleaded not guilty last week in Nigerian court to charges of fraud and accepting bribes. She was granted bail in a hearing on Wednesday and is set to stand trial on October 14th

One of the world’s largest lawsuits, the claim pits the small Irish-run firm against Africa’s largest economy.

P&ID, which has attracted financial backing from hedge fund manager VR Capital Group, and support from British home secretary Priti Patel, has won a series of court rulings in London and the US.

The British Virgin Islands-based firm has said the Nigerian investigation is a “sham” and an attempt to escape its legal obligations. Its lawyers have threatened to start seizing state assets abroad to enforce the award.

After Bloomberg published an article about the Irish founders of P&ID and their history of broken contracts and lawsuits, Nigerian investigators intensified their investigation. Two former representatives of P&ID pleaded guilty in an Abuja court this week to 11 charges including money laundering.

“We are giving notice to international criminal groups by the vigorous prosecution of the P&ID scandal attempting to cheat Nigeria of billions of dollars,” Nigerian president Muhammadu Buhari said in an address to the UN General Assembly in New York on Tuesday.

Nigerian attorney general Abubakar Malami said in the interview that he was considering using the fraud allegations in court as part of its defence. The Nigerian ministers and officials were in the UK for a meeting with their legal team. A hearing is scheduled to take place in London on Thursday.

“The enforcement of the $9 billion cannot stand having been based on a foundation that is rooted in fraud, corruption, tax evasion and procedural circumvention,” Mr Malami said.

P&ID has said that its position is vindicated by the legal judgments in its favour.

The Nigerian anti-corruption agency’s investigators have uncovered large cash withdrawals from several companies linked to Mr Quinn and Mr Cahill since 2009, in breach of Nigerian money-laundering regulations, according to Mr Sanga. The largest withdrawal was for about $700,000 in cash. Investigators haven’t yet been able to trace the recipients of the money, Mr Sanga said. – Bloomberg