Ireland ‘at forefront’ of planning for when banks fail, SRB chair says 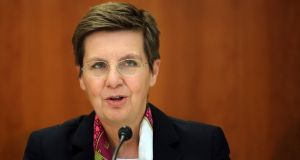 Ireland, home of Europe’s worst banking crisis, has emerged as one of the most proactive countries in seeking to make sure that banks can be resolved or wound down in the event of an institution running into trouble in future, according to the head of euro area’s bank-failure agency.

Speaking with The Irish Times in Dublin on Monday, the Single Resolution Board’s (SRB) chairwoman Elke Koenig said: “I think Ireland is, to a large extent, really at the forefront of the work, together with some others that are really pushing to find answers to make banks more resolvable.”

The SRB became responsible in January 2016 for ordering the restructuring or liquidation of failing banks. It is responsible for ensuring that taxpayer bailouts are minimised in future as debt investors – including senior bondholders – are “bailed-in” if a lender runs into financial trouble.

The State injected €64 billion into the country’s banks during the financial crisis, as shareholders were virtually wiped out and junior bondholders had €15 billion of losses inflicted on them. However, senior bank bondholders were spared financial pain.

The SRB has required that major lenders, under its direct remit, submit resolution plans – or what are known as living wills – detailing how they could be sorted out or liquidated in the event they are deemed to be on track to fail.

Ms Koenig said the SRB has received such plans from all six Irish lenders under its direct remit. These include AIB, Bank of Ireland and overseas-owned Citibank Holdings Ireland, Ulster Bank Ireland, Unicredit Bank Ireland and Depfa Bank. Less significant lenders will be required to submit living wills to their national authorities.

The SRB, which has about 120 financial groups under its direct remit, expects this will expand by between five and 10 as major international banks set up EU hubs to maintain access to the single market in the wake of Brexit, according to Ms Koenig.

The firms would also likely come under the European Central Bank’s banking supervision arm, the Single Supervisory Mechanism (SSM), from a regulatory point of view.

Meanwhile, Ms Koenig told members of the Institute of International and European Affairs on Monday morning that it is important for European political leaders to press ahead with the completion of a banking union with the establishment of a euro zone deposit insurance scheme.

Banking union, initiated in the wake of the financial crisis, was envisaged around three pillars: the SSM, SRB and a deposit insurance system.