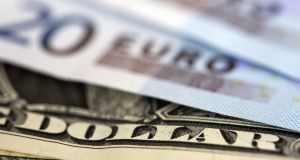 Investors have pulled money from UK equity funds every week since the UK voted to leave the EU. Photograph: Chris Ratcliffe/Bloomberg

Investors have withdrawn more than $20 billion (€17.5 billion) from UK-focused equity funds since the EU referendum in 2016 as concerns mount about the damaging impact of Brexit on Britain’s corporate sector.

Extreme uncertainty for business due to Brexit confusion plus the prospect of a hard left Labour government led by Jeremy Corbyn have tarnished the appeal of UK equity funds, which have haemorrhaged $20.6 billion of net outflows since June 2016, according to EPFR, a data provider.

Schroders, the London-listed asset manager, conducted a survey this month of 400 financial advisers who reported that 35 per cent of their clients had either moved assets out of the UK this year or were considering doing so, up from 21 per cent in the previous year’s survey. The US ranked as the top destination for money reallocated from UK assets. Japanese and emerging market equities also gained new business from the reallocations.

Just under nine out of 10 UK advisers cited Brexit as the biggest worry confronting their clients over the next 12 months.

Aversion to UK equities among international investors has risen as political tensions over Brexit have intensified ahead of the conclusion of negotiations with the EU.

Last month, the UK stock market was rated the least popular of 22 asset classes among global fund managers, according to a widely watched Bank of America Merrill Lynch survey.

Worries about Brexit were discussed at an event hosted earlier this month by UBS for large institutional investors overseeing trillions of dollars in assets.

More international companies that operate with 90-day notice periods could cancel contracts with British business as the year end approaches if an agreement between the UK and EU is not concluded, warned UBS.

The FTSE All-Share index has fallen 9.7 per cent so far this year. The UK benchmark is still up 9.5 per cent since the Brexit vote in 2016.

Lucy Macdonald, chief investment officer for global equities at Allianz Global Investors, the €524 billion asset management arm of the German insurer, said: “The risks around Brexit are now better priced in but the concerns are real and largely unquantifiable so it seems better to wait as we could see more value appear in UK equities.”

Inigo Fraser-Jenkins, a senior analyst at the brokerage Bernstein, said the outlook for equities was dependent on unpredictable political forces that have left the UK stock market “close to uninvestable”.

1 In six months we will be in the grip of a 1980s-style recession
2 Angela Merkel sweeps in to save the euro zone
3 Chartered Land gets green light for Dublin’s tallest tower on Parkgate Street
4 Google facing $5bn lawsuit for tracking in ‘private’ mode
5 Aer Lingus wants quarantine period axed to resume flights in July
6 Unemployment rate remains at near record 26.1% in May
7 Pinterest seeks new office for Dublin EMEA headquarters expansion
8 Dispute over Perrigo’s €1.64bn tax assessment comes before High Court
9 The fight over how to pay for the global economic recovery has begun
10 More than 2m people use website that shows lockdown distance limits
Real news has value SUBSCRIBE