Sweden’s push to get rid of cash has some saying, ‘not so fast’

One fifth of Swedes do not use ATMs any more 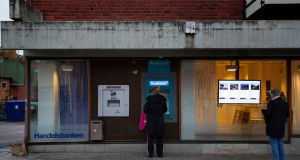 An ATM in Sandviken, Sweden. Cash is disappearing in the country faster than anyone thought it would. Photograph: The New York Times

Few countries have been moving toward a cashless society as fast as Sweden. But cash is being squeezed out so quickly – with half the nation’s retailers predicting they will stop accepting bills before 2025 – that the government is recalculating the societal costs of a cash-free future.

The financial authorities, who once embraced the trend, are asking banks to keep peddling notes and coins until the government can figure out what going cash-free means for young and old consumers. The central bank, which predicts cash may fade from Sweden, is testing a digital currency – an e-krona – to keep firm control of the money supply. Lawmakers are exploring the fate of online payments and bank accounts if an electrical grid fails or servers are thwarted by power outages, hackers or even war.

“When you are where we are, it would be wrong to sit back with our arms crossed, doing nothing, and then just take note of the fact that cash has disappeared,” said Stefan Ingves, governor of Sweden’s central bank, known as the Riksbank. “You can’t turn back time, but you do have to find a way to deal with change.”

Ask most people in Sweden how often they pay with cash and the answer is “almost never.” A fifth of Swedes, in a country of 10 million people, do not use ATMs any more. More than 4,000 Swedes have implanted microchips in their hands, allowing them to pay for rail travel and food, or enter keyless offices, with a wave. Restaurants, buses, parking lots and even pay toilets depend on clicks rather than cash.

Consumer groups say the shift leaves many retirees – a third of all Swedes are 55 or older – as well as some immigrants and disabled people at a disadvantage. They cannot easily gain access to electronic means for some goods and transactions, and rely on banks and their customer service. And the progress toward a cashless society could upend the state’s centuries-old role as sovereign guarantor. If cash disappears, commercial banks would wield greater control.

“We need to pause and think about whether this is good or bad, and not just sit back and let it happen,” said Mats Dillen, the head of a Swedish parliament committee studying the matter. “If cash disappears, that would be a big change, with major implications for society and the economy.”

Urban consumers worldwide are increasingly paying with apps and plastic. In China and in Asian countries ripe with young smartphone users, mobile payments are routine. In Europe, about one in five people say they rarely carry money. In Belgium, Denmark and Norway, debit and credit card use has hit record highs.

But Sweden – and particularly its young people – is at the vanguard. Notes and coins represent just 1 per cent of the economy, compared with 10 per cent in Europe as a whole and 8 per cent in the United States. About one in 10 consumers paid for something in cash this year, down from 40 per cent in 2010. Most merchants in Sweden still accept notes and coins, but their ranks are thinning.

Among 18-to-24-year-olds, the numbers are startling: up to 95 per cent of their purchases are with debit or a smartphone app called Swish, a payment system set up by Sweden’s biggest banks. Ikea, whose flat-box furniture is a staple of young households, has been experimenting to gauge the allure and effect of cashless commerce. In Gävle, about 100 miles north of Stockholm, managers decided to go cashless temporarily last month after they realised that fewer than 1 per cent of shoppers used cash and Ikea employees were spending about 15 percent of their time handling, counting and storing money.

Patric Burstein, a senior manager, said the cashless test has freed employees to work on the sales floor. So far, around 1.2 of every 1,000 customers have been unable to pay with anything but cash, and mainly in the cafeteria where people tend to spend change. Rather than bother with notes, Ikea has been offering those customers freebies.

“We said, ‘If you want a 50 cent hot dog, be my guest, take it. But next time maybe you can bring a card,’” said Burstein. The test so far suggests that cash is not essential and, instead, may be costly, he said. “We’re spending a lot of resources on a very small percentage that actually need the service,” he said.

The nearby branch of the Swedish National Pensioners Organisation has led protests against the experiment, in part, because many retirees like to go to the Gävle Ikea for a bite to eat. “We have around 1 million people who aren’t comfortable using the computer, iPads or iPhones for banking,” said Christina Tallberg, 75, the group’s national president. “We aren’t against the digital movement, but we think it’s going a bit too fast.”

The organisation has been raising money to teach retirees how to pay electronically but, paradoxically, that good effort has been tripped up by an abundance of cash. When collections for training are taken in rural areas – and the seniors donate in cash – the pensioner in charge must drive miles to find a bank that will actually take the money, Tallberg said. About half of Sweden’s 1,400 banks no longer accept cash deposits.

“It’s more or less impossible, because the banks refuse to take cash,” she said. Banks have propelled the cashless revolution by encouraging consumers and retailers to use debit and credit cards, which yields banks and credit card companies lucrative fees. That includes the bank-developed Swish smartphone app. Sweden’s banks have cut back on cash in part for safety reasons after a rash of violent robberies in the mid-2000s. The national psyche is marked by an infamous helicopter heist in Västberga in 2009, when thieves landed on the roof of a G4S cash service depot and stole millions – a drama now being turned into a Netflix film. Last year, only two banks were robbed compared with 210 in 2008.

In recent years, banks have dismantled cash machines by the hundreds. So little cash is used now that it has become expensive to track and maintain, said Leif Trogan, an official at the Swedish Bankers’ Association. There are two proposals by Swedish authorities to keep cash at hand. Parliament wants just the biggest banks to handle cash. The central bank is holding out for all banks to keep money flowing. Swedbank, SEB and other big Swedish financial institutions are fighting the lawmakers’ demands, saying it would place an undue burden on them to provide greater access.