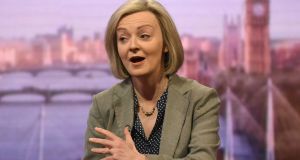 The shake-up in the system for calculating personal injury payouts didn’t quite have the glamour of the Oscars. The confusion was there, though, followed by the recriminations – and accountants were involved too.

It certainly gripped the City on Monday, as shares in insurance companies tumbled in the wake of a shock ruling from the lord chancellor, Liz Truss.

Millions of UK motorists now face sharp rises in their insurance premiums, the National Health Service will be landed with an additional costs of around £1 billion a year and the armed forces and businesses face bigger bills too.

At issue is the little-known “Ogden discount rate”, which is used to calculate compensation in personal injury and fatal accident cases. Since 2001, it has been frozen at 2.5 per cent, which is the rate of return it is assumed would be received on investing lump sum damages.

Compensation payments are reduced in line with the discount rate to allow for the additional income received by victims once they invest their damages.

The 2.5 per cent figure was based on a three- year average of real returns on index-lined gilts, or government bonds. But, from March 20th, the rate is being slashed to minus 0.75 per cent, reflecting the slump in investment returns in recent years. As a result, payouts in personal injury cases will be far larger than before.

As their shares plunged, insurance companies branded the move “reckless” and issued dire warnings of huge increases in premiums for millions of motorists as they effectively foot the bill for the bigger compensation payments. Younger drivers in particular could see premiums spiral by as much as £1,000 a year, they claimed.

Chief executives of more than a dozen of Britain’s biggest motor and commercial liability insurers met with chancellor Phillip Hammond on Tuesday to hammer home their protests.

They urged him to reverse the decision, citing concern about how their customers would be hit. Huw Evans, head of the industry body the Association of British Insurers (ABI) “It makes no sense to do something that will cost motorists, businesses and taxpayers so much at such a difficult time based on a broken formula.”

“It is not too late for the Government to deliver a fairer deal for consumers and claimants,” he added.

But it’s not just the government that needs to ensure fairness for consumers – the insurance industry has responsibilities too. And it’s quite clear that victims of road accidents or botched hospital operations have for years been losing out badly because of the Ogden rate, which has been way out of line with realistic investment returns.

For the more seriously injured, lump sum payments dictate the quality of care for the rest of their lives. Under the 2.5 per cent Ogden rate, many victims risked running out of money when they needed it most. At least in the future, their compensation will not be whittled away by out-dated estimates of investment returns.

Perhaps there will be a party after all. A fortnight before fun-loving Sir Philip Green celebrates his 65th birthday he has, finally, dug deep into his billionaire pockets to find £363 million to plug the gap in the Bhs pension scheme.

Announcing the move, Green stressed it was a “voluntary contribution”. Well, up to a point – and always assuming that the massive public and political backlash against him following the collapse of the cash-starved department stores chain played no part in his decision. Not the threats to strip him of his knighthood, or the legal proceedings instigated by the UK pensions regulator, which intended to force him to make a contribution.

For a voluntary settlement, one has to wonder why has it taken Green quite so long to stump up the cash? Bhs collapsed last April and it was nine months ago he promised MPs he would “sort it”.

At least the scheme’s 19,000 members can now look forward to a more comfortable retirement than they would otherwise have faced – had the government been forced to bail out the scheme, many would have suffered a 10 per cent cut in their monthly payments.

The pensions regulator has now abandoned its legal action against Green, who yesterday apologised to Bhs pensioners for “this last year of uncertainty”.

He added: “I hope this solution puts their minds at rest and closes this sorry chapter for them.”

But will it close the sorry chapter for Green? While the billionaire’s belated action may be enough to save his knighthood it has come too late, and appeared too grudging, to salvage his reputation. To many, he’ll always be known as “Sir Shifty”.