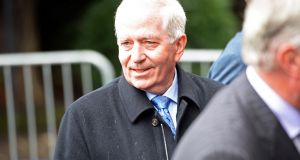 Arachas Corporate Brokers has bought Murray & Spelman, which is chaired by Charlie McCreevy, above, for an undisclosed sum

The deal, which is subject to Central Bank approval, will see Murray & Spelman’s 36 employees in Galway and Kildare transfer to Arachas, whose workforce will rise to more than 250 people as a result, employees of both firms were told on Friday.

Murray and Spelman’s financial services arm business is not included in the transaction. That will remain an independent business under the leadership of Michael Culhane, who will be leaving the broking business.

The move is part of the strategic decision to grow the Arachas business in Ireland and it is understood that the company is seeking further acquisitions.

Arachas, whose name is Irish for insurance, was set up a decade and a half ago through the merger of Cork-based broker Tyrrell Coakley with two Dublin-based peers, Hodgins Percival and Slattery Jermyn.

The company has made three other purchases – Kidd Insurances, Capital Cover Group and Clover Centre Insurance – since it was subject to a management buyout backed by UK private equity firm Sovereign Capital two years ago.

Insurance executive Conor Brennan left Zurich Insurance early last year to take over as head of Arachas, succeeding Donal Cronin, who committed to retaining his 23 per cent stake in the business, making him the largest shareholder, behind Sovereign Capital’s 54 per cent interest.

The most recent set of accounts for Arachas Corporate Brokers Ltd shows that its turnover rose to €18.2 million in 2017 from €17.2 million a year earlier, according to Companies Registration Office filings. However, pretax profit declined to €1.29 million from €2.28 million, as expenses increased.