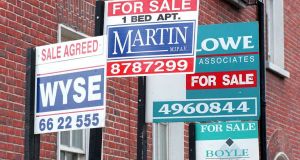 Mortgage lending here increased in net terms by €30 million in August and by €1.1 billion year on year, or 1.5 per cent.

Consumer advocate Brendan Burgess said the banking system here was “out of kilter” with the rest of Europe in offering new customers more competitive fixed-rate mortgages when the forecast was for interest rates to stay low in the short to medium term. Typically banks charge customers a premium for locking in a low rate.

Mr Burgess was speaking after the Central Bank published its latest monthly money and banking statistics which show the recent growth in lending has been driven entirely by fixed-rate lending, while floating-rate loans continued to decline.

The figures showed mortgage lending here increased in net terms by €30 million in August and by €1.1 billion year on year, or 1.5 per cent.

“Most existing mortgages are on variable rates and these rates are artificially high – up to around 4.5 per cent Standard Variable Rate (SVR) compared to a average across the euro zone of 1.54 per cent,” Mr Burgess said.

“If the lenders were offer competitive variable rates to new customers, they would have to cut the rates for existing customers as well. So they compete for new business with lower fixed rates,” he said.

Since the crash in late 2008, Irish banks have largely failed to pass on lower interest rates to variable rate customers, insisting that the higher rates reflected the elevated risk of lending into the Irish market. In reality the premium was there to compensate for loss-making tracker portfolios.

While the “wedge” between rates here and elsewhere have begun to come down, the gap is still significant.