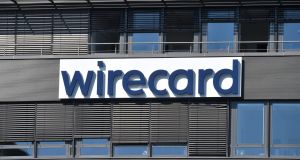 Wirecard collapsed into insolvency on June 25th after admitting that about €1.9 billion in cash was missing from its accounts. Photograph: Christof Stache

The German parliament is to hold a full inquiry into the collapse of the disgraced payments company Wirecard, in a move that will keep the affair at the top of the political agenda well into a critical election year.

A full parliamentary committee of inquiry was needed “to clear up an accounting scandal which has no precedent in Germany’s postwar history”, said Lisa Paus, finance spokeswoman for the opposition Green party. “We owe it to the investors and citizens of this country.”

MPs decided to push for a full investigation after concluding that a series of special hearings before the Bundestag finance committee had not answered critical questions about the authorities’ role in Wirecard’s collapse.

“The image we’ve been presented with over the past two months is of a government that just pushes the blame on to other people,” said Florian Toncar, an MP for the liberal Free Democrats (FDP).

Wirecard collapsed into insolvency on June 25th after admitting that about €1.9 billion in cash was missing from its accounts. Former chief executive Markus Braun, who denies allegations of fraud and embezzlement, and three other former top managers are in custody, accused of running a criminal racket that defrauded creditors of €3.2 billion. Jan Marsalek, the former chief operating officer, is on the run.

MPs will want to know when exactly the German government first knew about irregularities at Wirecard and whether it could have done more to prevent the fraud, which has badly damaged the country’s reputation as a financial centre and exposed profound weaknesses in its system of financial regulation.

Many opposition lawmakers believe the authorities were more focused on protecting a company viewed as one of Germany’s few tech superstars than in properly investigating alleged fraud at the group.

The shockwaves of the Wirecard scandal have reverberated to the top of German politics. MPs have questioned why Angela Merkel lobbied for the company during an official trip to China last year when reports of suspicious activity at the payments provider had been circulating for months.

Critics of Germany’s financial markets watchdog BaFin have also asked why it responded to reports in the Financial Times last year about accounting irregularities at Wirecard by filing a criminal complaint against the FT journalists involved. In addition, BaFin has been hurt by the disclosure last month that its employees were trading Wirecard shares in the months before the company declared insolvency, raising questions about potential conflicts of interest.

The decision to set up the committee means that political debate over Wirecard could dominate Ms Merkel’s final months in power. Bundestag elections next year will mark the end of her tenure after 16 years as chancellor.

A parliamentary probe could also prove embarrassing for finance minister Olaf Scholz, who is the Social Democrats’ candidate for chancellor next year. His ministry oversees BaFin as well as the Financial Intelligence Unit, Germany’s anti-money-laundering agency, which, like BaFin, stands accused of ignoring countless warning signs at Wirecard. In testimony to the Bundestag finance ministry, Mr Scholz had placed much of the blame on auditors at EY, who had given the company a clean bill of health over the course of a decade. – Copyright The Financial Times Limited 2020