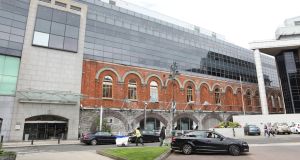 Insurance Ireland’s office in Dublin, which was raided this week as part of an investigation by the European Commission into complaints about cartel-like behaviour. Photograph: Collins

Four insurance brokers whose offices in Ireland were raided as part of an European Commission investigation into concerns about breaches of EU antitrust rules have told The Irish Times that they are co-operating fully with authorities.

Officials from Brussels and the Competition and Consumer Protection Commission (CCPC) visited and took data and material from the offices of at least four brokerages on Tuesday as part of an investigation into the market for covering trucks and lorries, according to sources.

These include the Dublin offices of global insurance brokers Marsh and Aon, the headquarters of Campion Insurance, and Wright Insurance Brokers in Wexford.

Wright chief executive Tony Wright said his firm was “one of a number of companies currently facilitating” authorities as part of their investigation.

“We believe our group has had a significant influence on insurance competition over the last number of years through the introduction of a number of new insurance carriers into the Irish market,” he said.

Mr Wright said on Friday afternoon that the EU had finished their initial investigation of his office and are unlikely to issue their findings for a number of months.

“However, we do not anticipate any negative findings, sanctions or fines. We expect a positive outcome for Wright Insurance Brokers,” he said.

A spokesman for Campion said that Dublin-based firm was co-operating with the investigation and that “we look forward to a speedy conclusion of the process”. He added that customers were unaffected.

A spokesman for Marsh and a spokeswoman for Aon confirmed on Friday that they were part of the investigation and were co-operating. A spokesman for the European Commission, which has made it clear that the inspections do not mean the companies are guilty of anti-competitive behaviour, also declined to comment.

It is not clear what triggered the EU investigation into the market for Irish haulage insurance. However, it is understood that the Irish Road Haulage Association (IRHA) was among organisations that have made complaints to both the CCPC and the European Commission.

The haulage association highlighted to an Oireachtas committee late last year how locally registered and insured trucks that spend most of their time on the Continent face much higher coverage costs than elsewhere in the EU.

It also noted that Irish hauliers operating mainly in Europe have faced large rate hikes in recent years, which insurers are blaming on increased personal injury claims and higher court awards in Ireland. Irish-registered trucks must, by law, be insured in the Republic.

Verona Murphy, president of the haulage association, told the Oireachtas committee in September that her members had experienced premium hikes of up to 100 per cent in the space of the year, leaving the average cost of covering a truck at €5,000, compared with €3,000 in the UK and €2,500 in Germany. She argued that there was no basis for higher rates for an Irish-registered truck carrying imports and exports to and from the Republic that spent 90 per cent of its time abroad “giving it a 10 per cent chance of an accident in Ireland”.

The European Commission also raided the offices of Insurance Ireland this week amid concerns over access to two databases used by insurers in the State.