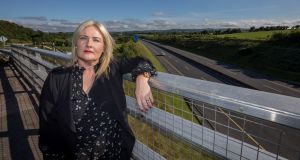 Irish Road Haulage Association president Verona Murphy: says her members had experienced premium hikes of up to 100 per cent in the space of a year, leaving the average cost of covering a truck at €5,000, compared with €3,000 in the UK and €2,000 in Poland. Photograph: Dylan Vaughan.

At least four insurance brokerages in Ireland were raided by European Commission officials on Tuesday concerning allegations of anti-competitive practices in the market for insuring trucks and lorries, The Irish Times has established.

These include the Dublin offices of global insurance brokers Marsh and Aon as well as the headquarters of Campion Insurance in Dublin 22 and Wright Insurance Brokers in Wexford.

The companies were raided by officials from Brussels and the Competition and Consumer Protection Commission (CCPC) in Ireland, who took material from their offices.

Campion, Wright Marsh and Aonconfirmed they are co-operating with the investigation. A spokesman for the European Commission, which has made it clear that the inspections do not mean that the companies are guilty of anti-competitive behaviour, also declined to comment.

EU competition authorities have signalled to the firms they are looking into commercial insurance as they examine the industry for potential breaches of anti-trust rules that prohibit cartels and restrictive business practices, according to sources. However, it is understood that haulage insurance lies at the heart of the investigation.

The Irish Road Haulage Association (IRHA) highlighted to the Joint Oireachtas Committee on Finance, Public Expenditure and Reform and the then taoiseach late last year how locally registered and insured trucks, which spend most of their time in continental Europe, face much higher coverage costs than elsewhere in the EU.

IRHA president Verona Murphy told the committee in September that her members had experienced premium hikes of up to 100 per cent in the space of a year, leaving the average cost of covering a truck at €5,000, compared to €3,000 in the UK and €2,000 in Poland.

Separately, the European Commission raided the offices of Insurance Ireland on Tuesday as it assesses concerns over access to two databases used by insurers in the Republic. This is believed to have been on foot of a complaint or series of complaints from would-be new entrants to the market about their ability to tap into information on these systems.

Meanwhile, the CCPC is continuing an investigation launched last year into potential competition law breaches by Irish insurers openly signalling motor premium hikes. The commission said this may result in a “degree of unspoken co-ordination” between rivals. Motor rates had surged by 70 per cent over three years at that stage as the industry sought to return to profit after years of losses.

State should use Covid-19 impact on building costs to build homes 07:50
Open Orphan wins new €4.3m challenge study contract 07:40
Arkle eyes results from Limerick zinc discovery ‘within weeks’ 07:24
Three Ireland switches on 5G network around the country 07:00
New car prices could rise by up to €10,000 if taxes increase in budget 06:51