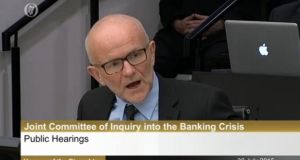 Former non-executive director Fintan Drury has denied any banking issues were discussed at an Anglo Irish Bank board dinner.

Speaking at the Oireachtas banking inquiry after a lengthy delay, Mr Drury said the event, attended by Brian Cowen and Anglo executives at its former St Stephen’s Green office in April 2008, was “completely unremarkable”.

He said his friendship with Mr Cowen has been the focus on much discussion.

Mr Drury said the board dinner in which has been a source of contradiction between Mr Cowen and David Drumm, was not a special set piece event to accommodate the former taoiseach.

He said these occasions happened twice a year.

Mr Drury said there was a broad discussion about anything other than banking.

Mr Cowen said no banking issues were discussed at the event but Mr Drumm has claimed there was.

Mr Drury said he has been friends with the former taoiseach for years.

He said a golf outing between he, Mr Cowen and Sean FitzPatrick was a purely social occasion.

He said had he wanted to discuss banking issues with Mr Cowen, he could have gone to his office and shut the door.

Mr Drury said people had conspiracy theories and nothing he said would change that.

But this was a question of his and Mr Cowen’s integrity.

Mr Drury said the dinner lasted about 90 minutes and there was “no general discussion” about the National Treasury Management Agency, which at the time was reluctant to place deposits with Irish banks.

Mr Drury said there were no presentations and no discussion of Anglo.

On the golf outing at Druids Glen in July 2008, Mr Drury said there was first a coffee, followed by golf and a dinner.

There was a meeting over coffee between Mr Cowen, Mr Drury, Sean FitzPatrick, former Anglo director and then Smurfit Kappa chief executive Gary McGann, and economist Alan Gray, who was a director of the Central Bank.

Mr Drury, Mr Cowen and Mr FitzPatrick then played golf and there was later a dinner.

He said the meeting of the five was to discuss emergng issues about the economy, with the taoiseach keen to get different perspectives.

He described it as a “one-off discussion” and Mr Cowen was keen to ensure that it wouldn’t be misunderstood that it was in some way a “kitchen cabinet” for the former taoiseach.

Mr Drury said it was a combination of “smart people” he knew and people that Mr Cowen knew.

“Brian had great belief in Alan Gray… so he wanted him there. He wanted Gary McGann there because he knew that Gary was very smart and very committed to public service and was also chief executive of one of Ireland’s largest companies.

Mr Drury said Mr Gray came with an agenda drawn up but there was no discussion about Anglo Irish Bank.

“The agenda that Alan brought with him had no reference to the (financial)issues that dominated subsequently,” he said.

“At no point was there any discussion whatsoever about Anglo Irish Bank. Why would there have been?”

Mr Drury was asked by Fine Gael TD Kieran O’Donnell whether it stretched credibility to say Anglo Irish Bank was not discussed at the outing.

Mr Drury said people do accept it is “credible” but there are a great number who don’t and who wouldn’t no matter what he said.

He said: “I have a code of ethics and standards. The defence I am offering of the account I have given about what happened in Druid’s Glen is you either accept what I told you as a truthful account of what happened on that occasion or you don’t.

“I have friends who find it lacks in credibility.”

Mr Drury said his friendship with Mr Cowen was such that he had privileged access to the former taoiseach and he could have met him behind closed doors at his office if he’d ever wanted to lobby him rather than meeting in a public place.

Mr Drury told the committee that he did not have a special access pass for Government Buildings and never lobbied Mr Cowen about Anglo.

Mr Drury said there was “absolutely” no discussion with Mr Cowen on the Government’s blanket bank guarantee in September 2008.

And he said that Mr Cowen would never have allowed himself to be influenced by Mr Drury or to do something inappropriate.

“If you know Brian Cowen as well as I do. Brian Cowen is someone you can give a view to on anything and your view may be passionately expressed but if Brian Cowen doesn’t think it’s the right thing you’ve wasted your time.

“To presume for a moment that Brian Cowen would have been influcenced to such an extent by me or anybody else in respect of one bank… that he would allow himself to be influenced to make a decison that was not in the interest of the people of Ireland or the State… that’s not Brian Cowen.”

Mr Drury also told the committee that he and Mr Cowen had curtailed their meetings in the past 12 months, meeting “very irregularly”.

“PartlyI regret that because the truth is that we live in a very small country and in an environment where if I met Brian Cowen for a pint or we went to a match together there’s a percentage of people who would think we were up to no good. It has constratined the friendship.

He earlier apologised to taxpayers affected by the bank crash.

He said the more that has emerged since Anglo was nationalised in 2009 enforced his need to make an apology.

Mr Drury said he has attended interviews with Director of Corporate Enforcement and accounted in full for what he knew.

He has also been interviewed for the Nyberg report.

Mr Drury said Anglo was “disinterested” in engaging with politicians and the level of disinterest of Mr Drumm and Mr Fitzpatrick was “acute”.

He said he never came across an institution that was less interested in engaging with politics than Anglo.

Mr Drury said there had been a narrative suggested by former Anglo executives that he was a go-to guy between politicians and Anglo.

He said: “I know and you know that executives have suggested that I would be in a position to get access to those.

“I have said very clearly and I am happy to say it again that I have no discussion with Brian Cowen - either in his time as minister for finance or as time as taoiseach - in regard to the affairs of Anglo Irish Bank.”

Mr Drury was asked about comments in his opening statement that “we gorged in the boom years” and who the “we” he referred to was.

He said there were many people who had no hand or part of what occurred.

However, he said: “If we are honest as a people there was great many people who over indulged and took too much risk with their own lives.”

The former non-executive director said Anglo was involved in putting the menu on the table and he had eaten more than he needed.

Mr Drury was due to begin his hearing at 9.30am, but this was delayed until after 1pm as the committee discussed legal advice based on the decision not to publish a witness statement by David Drumm.

Former chairman of Anglo and IBRC, Alan Dukes, is due to give evidence before the committee on Thursday about 6.15pm, as will Mike Aynsley, former chief executive of Anglo/IBRC.

1 Majority of employees don’t want to return to pre-Covid working patterns
2 If tourists are such pariahs should we not be testing them on arrival?
3 Tobacco giant’s menthol-ban substitutes take 5% share of Irish market
4 ‘My rent here is so low it’s a joke’
5 Goodbody’s planned €155m sale to Bank of China falls through
6 Homeworking is depriving me of juicy gossip
7 BrainWaveBank raises €1.2m for its ‘Fitbit for the brain’ technology
8 Norwegian airline sued in Dublin by inflight caterer
9 FC Barcelona to pursue Nike for compensation over defective shirts
10 ‘I set up an investment club many years ago with a bunch of friends’
Real news has value SUBSCRIBE

Norwegian airline sued in Dublin by inflight caterer 05:37
Homeworking is depriving me of juicy gossip 05:30
Companies cutting IT investment when they need it most, warns PwC report 05:30
‘I set up an investment club many years ago with a bunch of friends’ 05:20
Tobacco giant’s menthol-ban substitutes take 5% share of Irish market 05:11