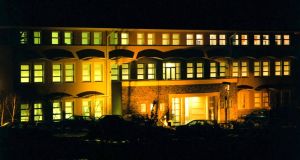 Foreign exchange and financial services group Fexco is backing a new aircraft leasing venture, Airborne Capital, that plans to have $5 billion in assets under its charge within five years.

Former executives of Dublin-based aircraft lessor Goshawk and French bank Natixis are setting up Airborne to cash in on increased demand for aircraft that is driven by growing passenger numbers.

Killorglin, Co Kerry-based Fexco is taking a substantial stake in the business, which will be headquartered in the Republic and have an office in London.

Airborne Capital intends to have more than $5 billion worth of craft under its management by the end of its first five years.

Irishmen Cian Dooley, who worked with Boeing Capital and Genesis Lease Corporation, and John O’Flynn, now in corporate finance with Goshawk and a former Ryanair senior manager, are joining him as founding partners. Mr O’Flynn will take up his new role in January.

The other founding partners are Jocelyn Noel, who also worked for Natixis. Goshawk’s former chief financial officer, Anand Ramachandran, and Eugene Lui, who worked in corporate finance with the same firm.

The departure of the Goshawk and Natixis executives from their former employers earlier this year sparked some speculation in the industry about their next move. News that they are joining forces is likely to attract attention within the sector.

Goshawk is an aircraft lessor with offices in Dublin, Hong Kong and London that has a fleet worth about $5.8 billion leased to a number of airlines around the world.

It is understood Airborne Capital will be a joint venture between the company’s management and Fexco, which is said to be giving substantial backing to the venture. The breakdown of the shareholding between the various investors is not known.

Aviation is a new departure for Fexco, which is best known to Irish people for its online and high-street foreign-exchange business, although it it operations in 29 different countries and a large number of multinational clients.

The company views aircraft finance as an attractive long-term bet and is weighing more investments in the area.

Its chief executive, Denis McCarthy, said Fexco was looking forward to “broadening its presence in this dynamic sector of the financial services market”.

Mr Sundaram said he and his colleagues were excited to be launching their new venture with Fexco’s support.

The Republic is a leading centre for aircraft leasing and aviation finance, with most of the industry’s big players, including Avolon, Aercap, SMBC and GECAS, based here.