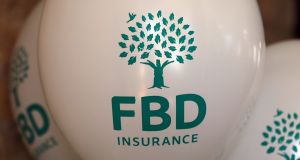 This week, insurer FBD decided it couldn’t delay much longer on holding its annual general meeting and chose July 31st as the day. Photograph: Nick Bradshaw

Insurer FBD Holdings was running out of road trying to put off the evil day.

While a slew of companies in Ireland and abroad moved in the second half of March to abandon plans to pay final dividends on 2019 earnings to save cash amid the Covid-19 shock, FBD said on April 3rd that it was deferring its annual general meeting (agm), which had been scheduled for early May, to an unspecific future date.

A key item on the agenda: a vote on an almost €35 million dividend, a parting gift, if you like, from Fiona Muldoon to investors after presiding as chief executive over a stunning turnaround of FBD’s fortunes in less than five years. (It equated to dividend yield of 10 per cent when it was announced in February, compared to an average of less than 2 per cent for the wider Irish market.)

This week, FBD decided it couldn’t delay much longer on holding the agm and pencilled in a date, July 31st.

“Taking into account the statement issued in April by the European Insurance and Occupational Pensions Authority urging the suspension of all discretionary dividend distributions, the heightened uncertainty resulting from Covid-19 and the importance of maintaining capital in the business, FBD has decided not to proceed at this time with the proposed dividend payment for the 2019 financial year,” it said.

The statement also revealed that it was setting aside a “precautionary reserve” of €22 million to cover costs on business interruption claims resulting from the Covid-19 lockdown, in the event it loses what is essentially a test case being taken by a group of pubs.

There are about 90,000 policies in Ireland for business interruption across the industry, according to the Central Bank. These mostly offer standard cover for loss of revenue or profit following damage to a property from fire or flooding. Industry sources say about half of business interruption policies mention notifiable or infectious diseases. This is an add-on feature for which customers pay extra.

Most policies are worded in a way where it’s obvious that losses to businesses resulting from the coronavirus pandemic are not covered. Regulators have made it clear, however, that where there is doubt about the meaning of a term in a policy, the interpretation most favourable to the consumer should prevail.

French-owned Axa Insurance Ireland conceded early on in the crisis that it would accept Covid-19 claims from more than 4,000 clients in the Republic, typically covering shops and offices where the virus meets the description of a general “notifiable disease” as set out in the relevant policies.

But, since then, Axa’s parent group last month lost a case that had been taken in Paris by a restaurant owner who was sitting on an ambiguously-worded policy, opening the floodgates for thousands of others.

Lawyers globally are set to emerge as the real winners as cases make their way through the courts in various jurisdictions, including the UK, home to the parent groups of many insurers the Republic. The Financial Conduct Authority in London is seeking court guidance on contested wording in policies of a number of companies.

There’s good reason, however, why FBD is the focus of litigation in Ireland, with an action by the Lemon & Duke pub in Dublin – where former and current rugby players Jamie Heaslip, Rob Kearney, Dave Kearney and Sean O’Brien are part owners – set to be among four test cases against FBD to be heard in October.

FBD’s general complete insurance policy document for businesses has various additional coverage options for companies under the category of business interruption, including notifiable diseases caused by food or drink supplied by the premises.

It lists 28 diseases that are covered, from acute encephalitis, an inflammation of the brain, to yellow fever. Coronavirus is not one of them. Total cover is capped at €15,000 unless a higher sum is stated in the policy schedule. The wording is clear.

The language in FBD’s pub policy, dating back three decades to a time when the insurer was pushing to diversify from its roots of covering farms and agri-businesses, is much looser.

It covers losses where a premises is closed under the orders of a local or government authority in the event of “outbreaks of contagious or infectious diseases on the premises or within 25 miles of the same”. It does not list diseases.

For valid claims, it says that it will pay out for the loss of gross profit during the indemnity for up to 12 months after it first occurred, comparing earnings with the same period the year before, though taking into account trends and other circumstances affecting the business.

FBD has 1,300 pub clients. It has received over 700 business interruption claims, mostly from pub policyholders.

The company reiterated this week that it “remains strongly of the view that our business insurance policies do not provide cover for a pandemic of this nature”. But it has seen fit to set aside a provision of €22 million to cover potential costs, as the test cases will have wider ramifications.

The reputational cost could be far greater, even if FBD wins.

FBD decided at the end of March to install well-known corporate figure Paul D’Alton as its interim chief executive as its search for a successor to Muldoon, which began last October, has so far failed to deliver a permanent replacement.

There has been all manner of industry speculation on potential names, but it’s not even clear if the board has a preferred candidate at this stage. The Central Bank would likely want to have a clear understanding of a potential CEO’s approach to the thorny business interruption topic in its vetting process.

It would be a brave individual that would put themselves forward.

Would someone who is happy with FBD’s current approach even make it through?