Moneycorp gets regulatory clearance in Ireland in Brexit-proofing move 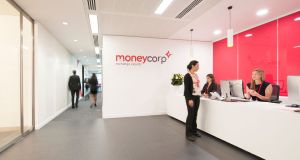 Foreign exchange and payments group Moneycorp has received important regulatory clearance from the Central Bank as the London-based group seeks to protect itself from any restrictions that may arise as a result of Brexit.

The Central Bank has granted the payments business its electronic money institution and Mifid (Markets in Financial Instruments Directive) licences, which will ensure the company can continue trading throughout the EU.

Moneycorp’s Dublin office, which opened in 2013, has operated as a branch of its UK regulated entities. “As part of Moneycorp’s strategic response to Brexit and wider market developments, it has now secured its e-money and Mifid licences from the Central Bank of Ireland for a newly established Irish company,” the group said.

An e-money institution is one that has been authorised to issue electronic money under European regulations. Under Mifid, companies dealing in certain financial services must be authorised to carry out those activities within the EU.

Moneycorp would not be drawn on the extent of regulatory capital it has been required to inject into its Irish arm and nor would it comment on the cost of the process to the business. However, the company said it would increase employee numbers at its Irish operation from 15 to 25 within the next 12 months.

Bryan McSharry, chief executive of Moneycorp’s European business, said the licences ensured it could “continue to support our existing customer base, continue to grow our business in Ireland and expand our business across the EU in a post-Brexit environment”.

Moneycorp completed €3 billion worth of transactions for Irish clients last year – primarily import and export businesses that need to manage their foreign exchange exposure. In total last year, Moneycorp exchanged €43.5 billion last year in more than 120 currencies. The company has offices in the Republic, the UK, the US, the UAE and Australia, among other locations.