Details of every stock, bond or other investment held by pension funds will have to be recorded 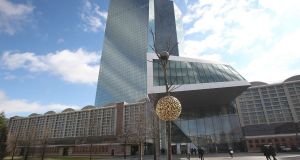 The ECB is interested in how pension fund money is invested – in which countries, for how long and in which sectors of the economy.

Details of every stock, bond or other investment held by pension funds will have to be reported to the ECB under the proposed new regulation as the bank looks to harmonise information on pension fund assets and liabilities across the euro zone.

Aurel Schubert, the bank’s director of general statistics, said the new data would fill an important data gap. He said pension funds were one of the largest and fastest growing investors in global capital markets.

Up to 50 million citizens across the euro zone, including in Ireland, will rely on private pension funds for retirement income and assets in such funds has almost doubled in the 10 years since the financial crash to around €2.5 trillion.

The ECB is interested in how that money is invested – in which countries, for how long and in which sectors of the economy.

A public consultation period on the new draft rules opens on Wednesday and will run until September 29th. A public hearing will be held by teleconference on September 21st.

The ECB expects the new rules to come into force early next year. They will oblige pension funds to report on their assets and financial transactions quarterly and on liabilities and scheme membership annually. The first reports will be due at the end of 2018.

Following consultation with the industry, plans for quarterly reporting of scheme liabilities has been dropped.

The rules are likely to impose significant new costs on pension funds, many of which will have to upgrade IT systems and adjust current data sets.

“Remarkably, in most cases set-up costs were estimated to be significantly higher than running costs,” the ECB said, reporting on industry feedback

Derogations from reporting will be granted to the smallest pension funds – particularly those with less that €10 million in assets or fewer than 100 members – the ECB says, as long as a minimum of 80 per cent of the total pension fund assets in a member state are covered by reporting.

Aside from full derogations, the ECB says reduced amount of data will be required from smaller institutions required to engage with the reporting.

Ultimately, it says, “less than 2 per cent of the total potential reporting population – around 1,500 to 2,000 pension funds – will actually be subject to the full set of reporting obligations”. Even this small cohort will, the bank says, cover two-third of pension scheme members.

Those subject to the full set of reporting obligations will be required to deliver 2,000 separate bits of data. Mr Schubert noted that this compared favourably with the 60,000 data points required of the banking sector in its regular statistical reports.

The new rules will not apply to social security pensions, such as Ireland Social Insurance Fund, which manages the State pension, or individual pension plans.

1 Belgium helps Ireland to a Brexit boon
2 ‘My rent here is so low it’s a joke’
3 Can Grafton Street stop the flood of closures?
4 New Powerscourt Springs hotel to open in defiance of virus gloom
5 This charming man: how Paschal Donohoe won the Eurogroup presidency
6 Pharmaceutical industry signals it won’t extend drugs agreement
7 Goodbody’s planned €155m sale to Bank of China falls through
8 Goodbody loses a second suitor as Bank of China deal falls through
9 ‘Sad day’ for House of Ireland as tourism retailer goes out of business
10 Bank of Ireland launches €200,000 prize fund
Real news has value SUBSCRIBE