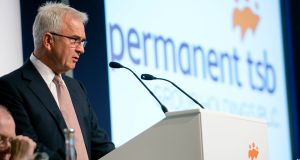 The backdrop couldn’t be more favourable for Permanent TSB.

The bank’s’s gross mortgage lending rose 62 per cent year on year in the first six months of the year to €341 million – beating the market’s 35 per cent growth rate.

The Irish economy, as PTSB highlighted in its interim report, published on Wednesday, is set to grow by more than 4 per cent in 2017 for the fourth successive year, while employment levels continue to rise and the housing market extends its recovery from the crash.

PTSB continues to win new customers, opening more than 20,000 current accounts during the first half, marking a 17 per cent annual increase, while operating profit at the group – stripped of one-off gains and charges – rose by 5 per cent to €59 million.

However, the market was having none of it on Wednesday, with the shares falling as much as 16 per cent in Dublin – the most since immediately after the Brexit referendum in June last year – to €2.10, its lowest level since October.

A number of things are weighing heavily on investors’ minds.

First, the bank demonstrated little progress in the first half on lowering its level of non-performing loans (NPLs) – even as the European Central Bank breathes down the necks of banks to resolve the issue. In fact, the NPL ratio rose to 28 per cent of loans in June from 27 per cent at the end of December. Still, this is partly down to the fact that the group only recently lifted a pause on repossessions and legal action that it introduced in late 2015 after identifying a number of cases where borrowers had lost their homes before discovering they were on the wrong rate.

The group has €5.78 billion of NPLs on its books – though more than half of these are in some sort of long-term restructuring plan. The real problem is the €2.68 billion amount within the figure of loans that have not been treated – either because the bank can find no viable solution for the customers as their circumstances are so dire or the troubled borrowers have refused to engage.

PTSB says it aims to reduce its NPLs ratio below 10 per cent “over the medium term through a range of strategies including: accelerated workout; maximised repayments; natural cures; closures (assisted voluntary sales and foreclosures); and portfolio sales”.

It failed to offer much by way of detail on the various options.

The move from forbearance to asset sales and more repossessions may result in higher losses than many analysts have forecast. Indeed, Goodbody Stockbrokers analysts said it might “pose risks” to an investment case that the bank will end up with excess capital on its balance sheet.

Meanwhile, an all-important ECB-driven review of the riskiness of assets across the euro-zone banking system is now likely to lead to PTSB recognising a €2.8 billion increase in so-called risk-weighted assets, according to analysts at Davy, using data given by the bank on Wednesday. That compares with previous guidance in the region of €1.9 billion and €2.1 billion.

The effect of this is that it will serve to dent PTSB’s all-important capital reserve ratios by 4 percentage points, including a 1.5 per cent adjustment taken in the first half of this year.

Still, Darren McKinley, an analyst with Merrion Capital, said PTSB’s shares “look cheap” following the share price slump, which has left the group trading at less than half the value at which it values its assets.

The bank has signalled that it is likely to release more bad loan provisions in the second half of the year as it prices in much of the rise in house prices in 2017. Home price inflation was running at almost 12 per cent in May.

1 ‘Saudi Arabia is where the opportunities will happen in future’
2 Data centres will force State to choose between climate and investment
3 MSD buys Takeda biologics plant in Dunboyne
4 The first seven winners of Business Person of the Month
5 Facebook agrees Irish wind-farm deal with Brookfield in Tipperary
6 Restructuring can leave retained staff feeling insecure
7 Nokia timeline
8 Dubliner modernising the city of Palo Alto
9 How to . . . upgrade your console’s storage
10 Trump’s TikTok move may have far-reaching consequences
Real news has value SUBSCRIBE