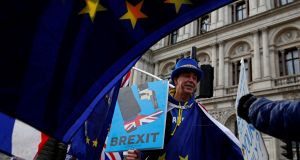 Ireland is likely to issue an increasing number of authorisations for financial groups seeking to move operations to Dublin from London ahead of Britain’s March 29 departure from the EU, as worries grow about a no-deal Brexit.

Dublin wants to become a hub for previously UK-based institutions to service EU clients and the shift by financial services companies has been accompanied by similar moves by groups in sectors such as pharmaceuticals and the law.

One Irish official briefed on the authorisation process said the country’s central bank was examining applications from “significantly” more than 100 financial institutions, mostly in asset management, investment and insurance, but cautioned that the final number of approvals was likely to be “closer to 100”.

Institutions including Barclays and Bank of America Merrill Lynch have already received authorisation to expand in Dublin. Barclays’ operation in the country will have about €250bn in assets, while the BofA business will have $50bn on its balance sheet.

“The expectation is that between now and the end of March we will see more of those [approvals for financial groups] coming through,” said Martin Shanahan, the head of IDA Ireland, the state inward investment agency, which has an important role in attracting the international companies on which Ireland’s economy relies.

Mr Shanahan highlighted the decision facing financial groups that until now have relied on the EU’s passporting rights to sell products elsewhere in the bloc from bases in the UK. Such groups will lose those rights early next decade if a Brexit transition period takes force, or as early as March 29 if the UK crashes out of the bloc without a deal.

He added that “there will be no one outright winner” in the contest between Dublin, Frankfurt, Luxembourg and Paris to attract financial services operations relocating from London.But he stressed that Ireland — which itself could be hit hard by the collateral damage from a no-deal Brexit because of its close economic ties to Britain — was also winning business in other sectors.

Mr Shanahan said Brexit was directly linked to 55 new investment projects in Ireland that could create more than 4,500 jobs. He added that, because of the uncertainty around Brexit, “a lot of companies” were “progressing [with relocation plans] regardless of what the outcome is going to be now”.

British prime minister Theresa May has agreed a draft withdrawal treaty with the other EU27 member states, but faces big obstacles in winning House of Commons approval — opening up the prospect of a no-deal exit, as well as other possibilities, such as a delay beyond the March 29 date.

Pharmaceutical and medical devices groups have also ramped up operations in Ireland to secure pan-European distribution rights for new products after Brexit. UK companies establishing an Irish hub since Brexit include Wasdell and Central Pharma.

More than 2,000 UK solicitors have registered in Ireland since the 2016 Brexit referendum amid concern about the possible loss of the right to represent clients in EU courts. “It’s a phenomenon of Brexit: 11 per cent of the names of solicitors on the roll in Ireland today are England and Wales-qualified solicitors whose names have been transferred within the last two-and-a-half years,” said Ken Murphy, director-general of the Law Society of Ireland, the professional body for solicitors. “We’re anticipating a further surge in numbers as March 29 approaches.” Such lawyers were “enrolling but not arriving” in Ireland, he said. “With very rare exceptions they are remaining in practice in London, Brussels or elsewhere. They’re simply seeking to protect their position in the future as practitioners of European law. They’re particularly concerned about legal privilege for their clients in EU investigations, so their legal advice can’t be seized by the EU commission.” – Copyright The Financial Times Limited 2019

1 EU divisions laid bare by ‘frugal four’ Covid recovery proposal
2 Schrems calls on EU authorities to intervene in ‘Kafkaesque’ DPC case
3 Player Wills site: Hines and APG to seek permission for 416 homes
4 Eir sells mobile mast infrastructure company for €300m
5 Pricewatch: Coronavirus has given us four categories of shopper
6 Economies can be restarted if bold and imaginative choices are made
7 Several jobs saved after sale of office supplier Spicers Ireland
8 Will remote working mean an end for the corporate HQ?
9 Dawn Meats reopens plant supplying McDonalds burgers
10 Pilita Clark: A lot of us are losing it in lockdown – but we really shouldn’t
Real news has value SUBSCRIBE