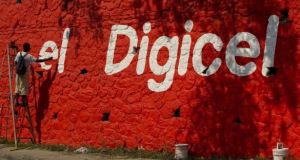 Digicel offered holders of the 2022 bonds a higher, 9.125 per cent interest rate on new senior bonds.

Businessman Denis O’Brien’s telecommunications group Digicel has convinced holders of $1.89 billion of bonds that are due to mature in 2020 to postpone their scheduled repayment by two years, following months of negotiations in a debt restructuring.

That represents almost 95 per cent of the group’s 2020 bonds, the group said on Wednesday.

Digicel, which has a $6.7 billion debt pile, said in August that it was looking for bondholders owed $2 billion in October 2020 to swap them for similar notes due in 2022 and carrying the same interest rate, or coupon, of 8.25 per cent.

At the same time, it offered holders of $1 billion of notes due in 2022 to swap their investments for 2024 bonds, carrying the same coupon of 7.125 per cent. The plan was determined by debt ratings agency Moody’s to be a “distressed” exchange offer.

Following months of negotiations with representatives for a group of bondholders and Digicel extending the deadline for investors to take up the offer, the group, which operates in 31 countries across the Caribbean and Asia Pacific regions, improved the terms of its proposal earlier this month.

The new terms involve holders of the 2020 notes being offered up to $1 billion of higher-ranked senior secured notes, as well as senior notes. These, too, carry a higher ranking than the original bonds.

In addition, Digicel offered holders of the 2022 bonds a higher, 9.125 per cent coupon on new senior bonds. However, two percentage points of the annual interest on these notes will be rolled up until the final maturity date. Bondholders holding the 2022 securities have until Friday to sign up to this offer.

The Irish Times reported last month that Digicel had indicated to creditors that it may not meet its debt-burden target for its current financial year to the end of next March, as its planned sale of unwanted assets drags on.

The company had previously forecast that it would cut its debt to 5.7 times earnings before interest, tax, depreciation and amortisation (ebitda) at its fiscal year-end from 6.7 times last March. The guidance was premised on Digicel raising up to $500 million on asset sales and increasing its full-year ebitda by about 10 per cent on the year to $1.1 billion.

However, sources said Digicel executives signalled on a call with analysts on November 29th that there may be a delay in delivering the asset-sales proceeds.

The company raised nearly $84 million on a sale-and-leaseback deal on 451 Jamaican mobile phone towers during the period. It is also set to generate $55 million on a similar sale involving a portfolio of south Pacific towers by the end of the year.