The direct financial impact of Brexit on financial services companies is nearly €4.5bn 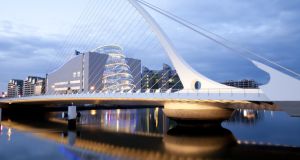 Dublin remains the most popular choice for financial services companies to relocate post-Brexit, but Luxembourg is close behind, a new indicator shows.

Some 29 companies have committed to relocating staff or operations in Dublin since the Brexit referendum result, according to EY tracker, ahead of Luxembourg with 23 relocations and Frankfurt with 22.

According to the indicator, €1.1 trillion in assets and 7,000 jobs have been relocated away from Britain since June 2016.

EY said most companies have either paused or slowed down Brexit preparations of late while they await clarity on what happens next.

The quarterly tracker shows that the direct financial impact of Brexit on major financial services companies has now reached nearly €4.5 billion. This sum includes a €1.5 billion cost of relocating staff and operations, legal advice, contingency provisions, as well as an additional €2.9 billion for capital injections to scale new non-UK headquarters.

Financial services-related investment into Europe increased by 23 per cent in 2018, recording the highest total – 421 projects – in a decade; in part a reflection of the market’s fragmentation as companies looked to set up a second European headquarters in advance of Brexit.

Looking at the Republic of Ireland specifically, it attracted 32 financial services-related projects in 2018, versus 28 in the prior year.