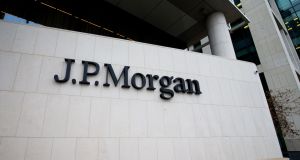 An Irish subsidiary of US banking giant JP Morgan has been fined €1.6 million in respect of regulatory breaches relating to the outsourcing of fund administration activities.

JP Morgan Administration Services (JPMAS), a subsidiary of JP Morgan Chase, was found on four occasions to have breached regulatory requirements set by the Central Bank of Ireland, three of which related to outsourcing.

While Wednesday’s fine was the largest imposed on a fund administrator, the largest fine for a case involving outsourcing was the Ulster Bank Ireland case which concluded in 2016. In that instance, the Central Bank fined Ulster Bank €3.325 million.

However, subsequent breaches were identified by JP Morgan’s internal audit function in 2015 and again in 2016.

As a result of its failure to obtain approval of the Central Bank to outsource fund administration services on three occasions, and failure to have adequate control systems in place on one occasion, the bank found that JP Morgan didn’t have a clear understanding of its outsourcing arrangements.

Additionally, it “persistently failed to remediate the root causes of these failings despite repeated supervisory intervention by the Central Bank over a number of years”, something that was seen as an aggravating factor in the case.

“These weaknesses were further evidenced by the firm’s repeated failures to satisfactorily remediate the issues identified by the Central Bank as part of its supervisory engagement with the firm. The fine imposed reflects JPMAS’s failure to address the root causes of these weaknesses over several years.”

The Central Bank views this process as having risks and therefore requires fund administration companies to seek approval before it outsources a regulated activity.

“When firms outsource activities, they do not outsource their responsibilities. It is important for firms to have strong controls in place around the governance and oversight of all outsourcing arrangements to ensure that they comply with all legal and regulatory requirements,” Ms Cunningham added.

In total, JP Morgan was fined €2.28 million in respect of its breaches, although that was reduced by 30 per cent by the Central Bank. The maximum fine in respect of this breach is €10 million, or an amount equal to 10 per cent of the annual turnover of the company, whichever is higher.

“JP Morgan has co-operated fully with the CBI and has already made remedial adjustments to controls procedures in the associated legal entity in Ireland,” a spokesman said in a statement.

“At no point were our clients or the quality of the service we provide to them affected, and we continue to operate our fund administration business normally.”

Wednesday’s fine represents the Central Bank’s 130th settlement since 2006 under its administrative sanctions procedure, bringing total fines imposed by the bank to over €91 million.