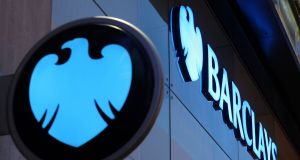 Barclays’ new euro rates trading desk is likely to be based in one of its other European offices, such as Frankfurt or Paris. Photograph: Dominic Lipinski/PA Wire

Barclays is preparing to split its euro rates trading team because of Brexit and plans to move part of the unit that trades euro zone government bonds and interest rate swaps away from its main trading floor in London.

The bank has not decided where its new euro rates trading desk will be based but it is expected to involve slightly fewer than 10 traders being based in the euro zone, according to a person briefed on the plan.

The British bank is planning to make Dublin its main EU hub outside London, adding 150 to 200 more staff in a new office building in the Irish capital. It is also beefing up its legal status to become a standalone subsidiary with its own capital and regulatory oversight.

Jes Staley, chief executive of Barclays, plans to visit Dublin this week to discuss its Brexit plans and to view its new Molesworth Street office in the heart of the city, with capacity for up to 400 people.

The bank’s new euro rates trading desk is likely to be based in one of its other European offices, such as Frankfurt or Paris. These will soon be converted from branches of its London headquarters to become offshoots of its new Irish subsidiary.

The shift in the euro rates team is designed to allow Barclays to continue trading euro securities with European clients even if the UK crashes out of the EU in March 2019 with no trade deal or transition agreement to maintain access to the bloc’s single market.

The plan highlights the level of uncertainty over the City of London’s position as the dominant centre for trading euro securities. The European Commission and European Central Bank are pushing for the EU to retain direct oversight over clearing such assets.

Without a free trade deal between the UK and EU to preserve mutual market access for financial services, banks will lose their “passport” that gives them the right to trade securities across Europe from London.

Both sides have committed to a transition deal to avoid a “cliff edge” Brexit by maintaining the status quo until December 2020, but that agreement is unlikely to be finalised until close to the date when the UK leaves the EU in March 2019.

London will remain the bank’s main hub for euro rates trading and the leader of that team will still be based in the UK capital.

“Meeting the needs of our clients worldwide is our top priority,” the bank said in an emailed statement. “Barclays continues to plan for all contingencies relating to Brexit to ensure seamless service for our clients.”

Mr Staley has consistently said the impact of Brexit on the bank is minor compared with the work it has done to comply with UK ringfencing rules and US intermediate holding company requirements.

It nonetheless remains one of the big challenges still facing him and the bank’s chairman, John McFarlane, before his planned retirement at its annual meeting in May 2019. – Copyright The Financial Times Limited 2018