Bank must answer questions over handling of debt collection errors 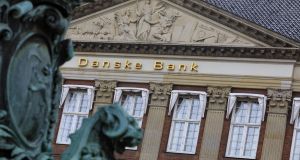 Danske Bank has until September 10th to answer a series of questions relating to its handling of debt-collection errors. Photograph: iStock

Denmark’s financial watchdog is launching an investigation into Danske Bank amid signs the lender may have misled the regulator over its handling of debt-collection errors that hit thousands of its customers.

The Financial Supervisory Authority has given Denmark’s biggest bank until September 10th to answer a series of questions relating to the case, including exactly when Danske first discovered there was something wrong.

Denmark’s biggest bank, which is still being investigated separately for a $230 billion Estonian dirty money affair, has now landed in a new scandal after it emerged that about 15,000 customers repaid too much in debt. Danske has acknowledged the mistake and says it is going over roughly 100,000 accounts in an effort to repair the damage.

The Danish government was swift to condemn the error, and says it plans to involve parliament as it looks into the matter. Meanwhile, the bank is growing increasingly unpopular in its home market, with a recent survey in Borsen (taken before the latest scandal) showing that more than half those polled would never use Danske.

The FSA said it was informed by Danske last year that errors had occurred in the bank’s debt collection system. Danske told the FSA it was working on fixing the failure and on compensating the customers affected.

“Based on that information, the FSA was under the impression that the bank had acted when the bank became aware of the situation,” the regulator said in a statement.

Already last year, Danske’s law firm warned the bank that the case was so serious that some of the executives involved might be facing prison sentences, according to the Berlingske newspaper.

Danske has apologised for the errors. Spokesman Stefan Singh Kailay called the situation “deeply regrettable” in a statement earlier this week, and said customers “should of course count on the calculations we make, and we regret that this has not been the case in this instance.” – Bloomberg