Reported figure of $8.3bn is more than double previous estimates 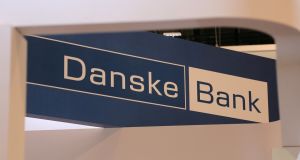 Shares in Danske Bank fell 3 per cent after reports that it may have laundered up to $8.3 billion (€7.1 billion) through its Estonian operations, more than double previous estimates, increasing the pressure on Denmark’s biggest bank.

Danish newspaper Berlingske reported that as much as 53 billion Danish krone (€7.1 billion) of suspicious money had flowed through the Estonian branch of Danske.

Rasmus Jarlov, Denmark’s business minister, said the “gravely serious” case was getting worse. “It casts a shadow of mistrust over our entire banking system, and nobody gains from that,” he wrote on Twitter on Wednesday.

The business minister has said that the bank’s internal investigation – due to report in the autumn – might not be sufficient. Opposition politicians in Copenhagen have called on Denmark’s fraud squad to investigate.

Danske was reprimanded and severely criticised by Danish regulators in May for weak anti-money laundering controls that led to suspected “criminal activities involving vast amounts of money”. The Danish Financial Supervisory Authority ordered Danske to set aside 5 billion Danish krone in capital to cover compliance matters but found insufficient evidence to make a case against any individuals.

“The headlines are clearly negative for investor sentiment for Danske, with the [anti-money laundering] issue dragging on stock performance over the past year,” said Adam Barrass, analyst at Berenberg, who noted that Danske had underperformed the European banking index by 10 per cent in the past year.

He added that the key risk was a potential US fine because of Danske’s use of dollar funding and transactions. But he added that such a fine was unlikely given that Danske has no US banking licence, dollar clearing facility or access to the Federal Reserve liquidity window.

The scandal raises significant questions about what senior management knew, when, and why they failed to act sooner. Danske launched its own investigation last year into the allegations that its Estonian branch was used from 2007 until 2015 for money laundering from countries including Russia, Azerbaijan and Moldova.

The investigation could pose questions for Thomas Borgen, Danske’s chief executive since 2013, who was in charge of international banking including the Baltics for four years before that.

Anders Jorgensen, head of group compliance at Danske, said it was too early to draw conclusions about the extent of the potential money laundering, meaning that it could not comment on specific figures before its own investigation is finished in September.

“On several occasions, however, we have said that the extent seems to be somewhat larger than previously estimated . . . But there is no doubt that even one krone laundered is one too many, and that we take this matter very seriously.”

Berlingske said the new transactions it uncovered were linked to the fraud from the Russian treasury discovered by Sergei Magnitsky, a lawyer who was later beaten to death in jail. A French court last year placed Danske under investigation over the Magnitsky case but later dropped the matter.