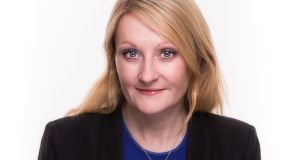 IBCB project director Marion Kelly: “Only change that is informed by the views of the public, and driven from within the banking sector, can work.”

The project director behind a new Irish Banking Culture Board (IBCB) being set up in the wake of the tracker mortgage scandal has said she sees merit in the findings on individual firms in annual surveys being made public.

In an interview with The Irish Times, IBCB project director Marion Kelly said she expects this issue to come up during a public consultation period later this year on the functions of the board.

“We’ll see what comes out of the consultation, but I think that it could be something useful,” said Ms Kelly, who is on secondment from Bank of Ireland, in response to a question on whether individual banks’ results should be published. The board will be funded by the five main banks.

An annual survey of bank workers carried out by a similar body in the UK, the Banking Standards Board, is reported on an aggregate basis, rather than for each individual firm. This survey looks at issues such as whether bank staff see their firms acting in customers’ interests or if individuals can speak up without fear of negative consequences.

The Central Bank published a report into the culture of Irish banks in June after banks were found to have wrongly denied some 37,600 homeowners their right to a tracker mortgage or put on the wrong rate entirely over the last decade. The study found that top banking executives retain too much of a crisis-era “firefighting” mindset to place customers at the heart of all decisions.

Ms Kelly said that she understands “where there may be cynicism” about the IBCB from the public and among general staff in banks.

“Banks have let people down, with what happened with tracker mortgages,” Ms Kelly said. “Only change that is informed by the views of the public, and driven from within the banking sector, can work.”

A survey of some 25,000 bank workers across the five main banks is being carried out from October 8th, seeking views on issues such as inclusion, diversity and whether employees are encouraged to do the right thing for customers.

The IBCB establishment office began a search on Friday for a chairperson for the board, which is expected to be established early next year.

Separately, Bank of Ireland’s chief executive, Francesca McDonagh, told staff in an email on Friday, marking her first year in office and the 10th anniversary of the banking guarantee: “We can’t guarantee that we will never make a mistake in the future. No one can. But when something goes wrong, we should respond fast, be transparent and consider the real impact on the customer.”