Collapse of merger talks leaves Deutsche and Commerzbank in limbo 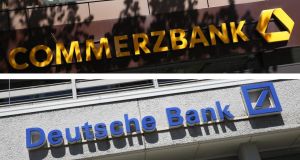 The collapse this week of merger talks between Deutsche Bank and Commerzbank brings to an end German attempts to create a national champion in the banking sector to rival competitors such as JP Morgan and Citigroup. Photograph: Hayoung Jeon/EPA

Pssst! Anybody want to buy a German bank? Two for sale, cheap at the price. All offers considered. Contact O Scholz, finance ministry, Berlin. No time-wasters.

The collapse this week of merger talks between Deutsche Bank and Commerzbank has left red faces all around, from the boardrooms of Frankfurt to the German finance ministry. The failure of the talks to produce a successful outcome creates a headache for corporate and political Germany, and leaves the fate of two of the euro zone’s biggest financial institutions shrouded in uncertainty.

It brings to an end German attempts to create a national champion in the banking sector to rival competitors such as JP Morgan and Citigroup. The idea of a tie-up between Deutsche and Commerzbank flattered Olaf Scholz, the German finance minister, into thinking he could engineer such a behemoth. But the idea never had the backing of three constituencies whose support was essential – investors, trade unions and the Bundestag.

The failure marks an inauspicious beginning for Germany’s latter-day notions of an industrial policy. It represents a blow not just to the self-image of the German banking sector, but to German pretensions to leadership in Europe.

There are probably multiple reasons why the plan fell, including the need for new equity and internal opposition within the two banks. But three obstacles to such a consequential transaction were obvious from the start.

The first is the scale and complexity of any deal. Deutsche is bigger than Commerzbank, but otherwise they are practically identical. Each is a bloated relic of managerial over-reach, lack of profitability and an inability to compete.

To overcome those entrenched handicaps would have required a huge cost-cutting exercise at the merged bank involving a reported 30,000 job losses and closures of branches (they have 2,400 between them). Such cost-cutting may be necessary in any case, but the fact that it was central to the merger case handed a trump card to those opposed to it.

The second is the dynamics of the banking market in which they operate. There are more than 1,600 banks in Germany, according to the European Banking Federation – a quarter of all the banks in the European Union. The successful ones are local or regional, not national. That makes Deutsche and Commerzbank outliers in their domestic market.

The five largest banks in Germany also have a smaller share of their home market than their counterparts in France or the UK. If Deutsche and Commerzbank cannot increase their market share separately, it is unlikely that they can do so in combination. The market is too competitive, and they are the wrong type of bank for that market.

The third obstacle is scepticism about the credibility of the management at both banks. As the Financial Times reported recently, European regulators suspected, almost certainly correctly, that Deutsche lacked the experience and readiness – the “ruthless brutality”, as one regular put it to the FT – to do what it would take to make the merged bank a success.

That created what is known in the world of mergers and acquisitions as “execution risk” – the likelihood that the merger would not deliver what its boosters claimed, possibly creating multiple regulatory headaches. The European Central Bank is already worried about the financial risks in the balance sheets of Deutsche and Commerzbank separately; the last thing it needed was those worries merged into a single outsized balance sheet without a credible plan to address them.

Following the failure of their big project, Deutsche and Commerzbank are stuck in a post-financial crisis half-life – which is why the collapse of the proposal has consequences for the euro zone. European banks are haunted by the legacy of the global banking crisis in a way their US counterparts are not. The American response to a banking crisis is to throw money at it – and in 2008, when Wall Street came close to collapse, that crude policy worked. The US banking sector is now strong and well-capitalised again.

The European response was more fragmented. European governments also threw money at their collapsing banks, as Irish taxpayers won’t need reminding. Finance Watch, a non-governmental organisation which has a website full of fascinating facts about the global banking crisis, has calculated that European banks consumed €2,000 billion of state aid between 2008 and 2015.

Yet the result is a euro-zone banking sector still nursing some of its crisis-era burdens of non-performing loans and unquantified risk, now exacerbated by negative interest rates. These add to the woes being suffered by Deutsche, which include a bloated balance sheet and its underperforming investment bank, a high-cost operation based mainly in London over which Frankfurt has never seemed capable of exercising adult supervision.

Commerzbank may now become a target for another European bank such as UniCredit or ING. If an offer were to emerge from somewhere, there would be domestic resistance, but the European Central Bank should be ready to back such a move. The question is what happens to Deutsche. Humbled by the financial crisis and its inability to overcome it, Germany’s biggest bank keeps tripping over its gargantuan size, its weak management and its aimless ambitions. Deutsche Bank is supposedly too big to fail. It is also too big to succeed.