An Taoiseach Leo Varadkar says that the government "has lost patience' with Irish banks over the tracker mortgage scandal. 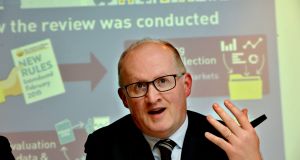 Central Bank governor Philip Lane: said the Central Bank had to “push to the limits” of its powers. Photograph: Alan Betson

The Central Bank has begun enforcement investigations into Bank of Ireland and KBC Bank Ireland as part of an industry-wide examination of overcharging of tracker mortgage borrowers.

The Central Bank said this week it had initiated the formal action against two unnamed lenders, which may lead to fines. A spokeswoman for the Central Bank declined to identify the two new lenders subject to enforcement investigations.

Law changes in 2013 doubled the maximum monetary penalty the regulator can impose on a financial firm for rule breaches, from €5 million to €10 million, or 10 per cent of turnover, and for individuals from €500,0000 to €1 million. However, sources said that any potential rule violations are likely to have occurred before the thresholds were raised.

The development comes almost two years after the Central Bank ordered 15 current and former mortgage lenders in the State to carry out examinations where customers had been wrongfully denied their contractual rights to a low-cost mortgage tied to the European Central Bank’s main rate.

Last November the regulator fined Permanent TSB’s former subprime lending unit Springboard €4.5 million for breaching consumer protection obligations in relation to tracker mortgages. It has also initiated enforcement actions against PTSB and Ulster Bank. Bank of Ireland and KBC bring the figure to five, while the Central Bank expects to launch actions against other lenders in time.

A Central Bank report this week revealed the number of overcharged customers across the industry had risen 23 per cent to 13,000 in the six months to the end of September. The figure is expected to rise further as the Central Bank said it was “concerned” that two lenders have failed to identify or recognise all of their affected customers.

Central Bank governor Philip Lane will tell the Oireachtas Finance Committee today that “all lenders did not sufficiently recognise or address the scale of those unacceptable failings” until his institution intervened.

Mr Lane said the Central Bank had to “push to the limits” of its powers and challenge certain lenders to identify and deal with affected customers.

The Governor’s opening statement was sent to committee members last night, after Taoiseach Leo Varadkar told the Dáil the Government has “lost patience” with banks involved. Minister for Finance Paschal Donohoe is also to meet and “admonish” the banks involved next week.

About 60 per cent of affected customers across the industry were wrongly denied tracker mortgages, while the remainder were not on the correct rate, according to the regulator. Some 23 homeowners and a further 79 buy-to-let borrowers have lost their properties as a result.

A spokesman for KBC declined to comment last night, while a spokeswoman for Bank of Ireland said: “We are working on the examination and engaging with the regulatory authorities in relation to the examination. However, as this is a regulatory process it would not be appropriate to comment further.”

Bank of Ireland, which put aside an initial €25 million last year to cover costs in relation to the tracker mortgage issue, has been lagging behind its main peers in starting a redress and compensation plan for affected customers. It told the Oireachtas finance committee on September 21st that it was only preparing to start remediation to 4,200 overcharged customers.

A spokeswoman said the compensation process had not yet started but “will commence over the coming weeks”.

KBC Bank Ireland is even further behind. The Belgian-owned bank declined on September 28th to give the Oireachtas committee an estimate of how many of its mortgage customers were affected by overcharging, making it an outlier among the country’s top five home lenders.