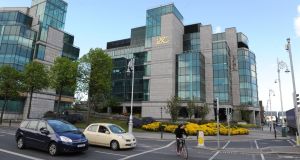 Brexit complexities could deliver a boon for corporate law firms in Dublin and add to the International Financial Services Centre’s attraction as a base. Photograph: Aidan Crawley

Ireland may become a jurisdiction for trillions of euro of financial contracts, covering everything from currency to fuel and interest-rate hedging agreements post-Brexit, under a plan being considered by a global body overseeing this market, The Irish Times has learned.

This would deliver a boon for corporate law firms in Dublin and potentially add to the International Financial Services Centre’s (IFSC) attraction as a base for global financial activities.

Most international financial derivatives contracts – crucial to the functioning of the modern economy as they allow businesses manage various risks and costs – use standardised documentation from the International Swaps and Derivatives Association (ISDA), drawn up under either English or New York law.

However, an association communication to members in recent weeks, seen by this newspaper, says that it is looking at Irish and French law as alternatives to English law for European derivatives contracts.

A financial derivative is a contract between two parties linked to the future value or status of an underlying asset, such as bonds, equities or currencies. Banks, for example, use derivatives to manage their interest-rate risks so they can offer more loans and better rates to consumers.

The ISDA development comes as the Bank of England warned last month about the “long-term validity” of £20 trillion (€22.5 trillion) of existing derivative contracts as a result of Brexit. The bank said that after the UK’s exit from the European Union, it would be “complex and difficult” for financial firms to tackle the risks to continued servicing of contracts between UK and EU firms.

The ISDA communication, dated October 5th, said that some firms within the EU would want derivatives contract documents to be governed by the laws of a continuing member state. The organisation is looking at the Irish and French legal systems as alternatives.

Christian Donagh, partner and head of derivatives at law firm Matheson, said that if ISDA opts to allow contracts to be drawn up under Irish law, it would “add a new dimension” to Ireland’s offering for inward investment. The IFSC is already a hub for international funds and treasury operations of some large multinationals.

“The similarity of the Irish and English legal systems is a distinct advantage in the context of the derivatives market as it offers the certainty, consistency and reassurance corporate and financial institutions require,” Mr Donagh said.

ISDA is best-known in Ireland for its role in deciding in 2011 that a number of the State’s lenders, including Bank of Ireland and AIB, had “credit events” at the height of the financial crisis as they inflicted losses on their junior bondholders.

This triggered payouts on insurance derivatives, known as credit default swaps (CDS) by way of settlement auctions. A credit event is financial industry jargon for a default on payment, breach of bond covenants or other event that casts doubt on a bond issuer’s ability to service its debt.

ISDA standardised documentation for derivative contracts – known as master agreements – allows financial firms to draw up terms on complex deals fairly quickly and enables them to resolve most disputes through arbitration. This would avoid a situation of cases clogging up the courts, according to experts.

1 Who are Ireland’s 17 billionaires?
2 Are there annual limits on inheritances or gifts to a child?
3 Fianna Fáil may have just pressed the pause button on the property market
4 UK to prioritise EU trade deal over one with United States
5 O’Flynn ‘very unhappy’ with extra payments to former employee, court hears
6 Eason puts Blanchardstown store on market at €16m
7 My father in a nursing home wants to gift me his house
8 Mixed-use investment in Greystones town centre guiding €5.5m
9 IDA chief says State could soon ‘be fighting for a smaller pool’ of foreign investment
10 Takeda overhauls Shire’s Irish structure to ease dividend payments
Real news has value SUBSCRIBE