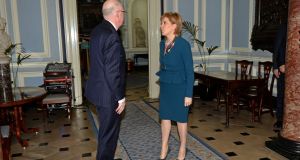 Scotland’s first minister Nicola Sturgeon, who will address the Seanad Tuesday, has said she believes the United Kingdom’s negotiations to quit the EU will take longer than two years.

Speaking after she met with the Minister for Foreign Affairs Charlie Flanagan, Ms Sturgeon said the British government must find a way of securing a temporary deal with the rest of the EU.

“I believe very strongly that given the complexities of the article 50 process it would be sensible for the UK to very explicitly make it clear that it is seeking a transitional period before the UK formally exits.”

Declaring that the UK’s interests were best served by staying inside the EU’s single market, Ms Sturgeon said she hoped the Scottish government could have some influence on the negotiations even though it would not be at the table. Her priority was to secure the best possible outcome for Scotland, she told reporters.

Promoting the role of women in politics, Ms Sturgeon, who shared her cabinet positions equally amongst men and women, said she was heartened to hear that more women were now in the Dáil.

“Gender equality is one of the greatest economic opportunities of this century. As first minister of Scotland it is my responsibility to look at how we as a government can accelerate progress, how we can break the barriers facing women.”