Only events have the power to shift the Brexit debate

UK Politics: Tony Blair may be moving too soon in trying to reverse Britain’s EU exit 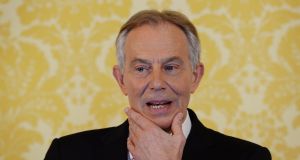 Former British prime minister Tony Blair: A politician who made his career by judging the moment must rediscover the knack. Photograph: Stefan Rousseau/PA Wire

When Margaret Thatcher died in 2013, Tony Blair usurped her as the source of all modern wrongs. Inequality: his fault. Terrorists: he provoked them. Spin and celebrity? Inventions of this huckster with Batman’s zeal and the Joker’s grin.

He is blamed for so much, so implausibly, that it feels sadistic to pin Britain’s exit from the EU on him, too. But it is dishonest not to. As prime minister in 2004, he had the legal power to put temporary limits on immigration from the new member states. Had he used it, the inflow would have been lighter, the public’s qualms less fierce and the referendum result 12 years later quite different.

There was sound economics behind his laxity – the labour market absorbed these diligent newcomers, these model citizens – but it was a historic misjudgment. That few sensed it at the time is some excuse.

The story is a lesson in how politics works. The trade kids itself that active organisation by clever strategists is what moves public opinion over time. More often, public opinion is changed by real-world events – a vast and sustained rise in low-paid immigration would do it – and politics obeys the change, even if it takes a while.

As British pro-Europeans organise to salvage their cause and Blair bids for a second life as their guide, if not their leader, they have the causal link the wrong way round. They believe their enemies won the referendum by organising over years, building networks, honing their lines and scouting for leaders until the public went with them.

It follows that they should do the same. The spoils could be a softer EU exit than the one on the cards, or even a second referendum on the final settlement.

But the campaign for exit was flat until May. Its most popular character, Boris Johnson, now foreign secretary, declared for it only in February, and even then it was with the most ambivalent form of words this casuist could devise.

Leavers had flashes of genius and Dominic Cummings, their scholar-enforcer, has thought more deeply about mass opinion and what moves it than anyone else in British politics. All the same, he could only ignite propane that was already in the air. He could only ask voters to “take back control” if they were already grieving its loss. The year 2004 mattered more than 2016.

The real example set for Blair and revanchist pro-Europeans by their adversaries is one of strategic patience, and not much else. Yes, think tanks, formalised campaigns and parliamentary teamwork can give shape to a vaporous movement. A speech by a former leader can preserve the news relevance of a defeated cause. Preparing a less tainted frontman for the European message – Labour MP Keir Starmer for example – makes sense. But nothing they do will change national sentiment as much as events.

If Britons feel poorer over the next year or two, if international confidence in the country falters palpably, if the exit terms taking shape are plainly awful, opinion will change and so will policy. If none of this transpires, no amount of organised pressure will work, or particularly deserve to. It would be as persuasive as arguments to leave the EU were before the great wave of migration in the past decade.

If co-ordinated resistance to exit so early in the process merely achieved nothing, there would be no harm in trying. What Blair might under-rate is the potential for counterproductivity.

Reasonable Leave voters, those who would pull their support for the escapade in the face of evidence, are the ones to court with the greatest care. Any scheme that smells of elite presumption, of a will to change minds even before the triggering of article 50, could lose them – and some Remain voters with them. A national digging in of heels would be all too human and all too British.

There is a view, held by the wilier pro-Europeans, that the right recently granted to parliament by the courts to vote on article 50 was a political defeat in disguise. It came too early. It gave the other side a (spurious) cause for outrage when the natural flow of events, including sterling’s fall and the government’s open confusion, was starting to expose them anyway.

A too visible, too organised and too early campaign against Brexit carries the same risk. There is a world of difference between Blair intervening now and Blair intervening as millions of voters stare in disbelief at retail prices in a year’s time. A politician who made his career by judging the moment must rediscover the knack. He must keep himself in reserve until events tell. He was the future once. If he has another, it has not come yet.