Passport applications from UK ‘likely’ to rise by more than 50% 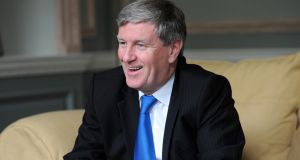 Irish Ambassador to Britain Dan Mulhall: “We hope the UK will remain part of the single market.” Photograph: Malcolm McNally

Applications for Irish passports from British citizens will likely be up by more than 50 per cent this year following the Brexit referendum, Irish Ambassador to Britain Dan Mulhall has said.

He made the comments during a question-and-answer session at a meeting of the British-Irish Parliamentary Assembly in Cardiff.

Mr Mulhall said that on current trends it looked as if there would be a 50 per cent increase between 2015 and 2016. He said applications from the UK had been up by about 10 per cent in the early months of the year, but this rose to 70-80 per cent in the months after the referendum.

For example, figures for September from the Department of Foreign Affairs show there were 7,518 applications from the UK compared with 3,431 in 2015.

Mr Mulhall said Brexit had created a “degree of uncertainty” about the future trading relations between the EU and UK.

“We hope that the UK will remain part of the single market and the customs union, but the outlook for this is still unclear,” he said.

“If the UK is outside the single market, then a new trading relationship will need to be negotiated and this is likely to be a complex and lengthy process.”

Under existing rules, Brexit must happen within two years of British prime minister Theresa May triggering article 50 of the Lisbon Treaty, the formal mechanism that allows a country to leave the EU. Ms May has said she will start this process by the end of March 2017.

Taoiseach Enda Kenny last week said it would be impossible to conclude Brexit negotiations within the two-year timeframe set down under EU rules.

Ms May had last week hinted at a transitional arrangement but her spokespeople later backed away from this position.