Ireland, do the UK a favour: refer Brexit to Europe 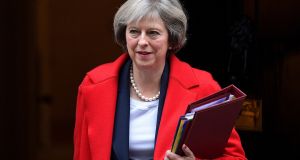 Theresa May: The article 50 process that ends with the UK leaving the EU begins with the prime minister notifying the Council of Ministers of the intent to leave. Photograph: Carl Court/Getty Images

They switch on their headlights, rev their engines, and Buzz points to Judy (Natalie Wood): “She signals. We head for the edge. And the first man who jumps is a chicken.”

That’s the pivotal scene in Rebel Without a Cause. But instead of jumping out, hot-rodding Buzz gets his jacket sleeve caught in the car door and drives off the cliff: fireball.

If you live in the UK, it feels a little like that now. You’re in the back seat of the speeding car, desperately worrying about the political equivalent of Buzz’s jacket sleeve. What might save us from what looks like inevitable disaster?

The article 50 process that ends with the UK leaving the European Union begins with Theresa May notifying the Council of Ministers that, in fact, it wants to leave. The question whether the prime minister needs the authority of the British parliament to give that notice will be answered by our supreme court in early January.

Even if parliamentary authority is legally required, it could well be mere formality, given that the ruling Conservative Party is dominated by committed Brexiteers and that the main opposition Labour Party hopelessly confused.

May says she will notify the EU by no later than March. And the government and the claimants in that supreme court case are all assuming that notification, once given, cannot be withdrawn. Once she notifies, that’s it: we’re off the cliff.

One of the many weaknesses of our referendum was that it invited the population to draw a comparison between a known world – remaining in the EU – and an unknown other. Might a population, its dignity ground down by endless cycles of austerity, project onto that world a hope for something better? Might they be encouraged to by those who would own that new world? Encouraged with unsustainable promises?

Writing the day after the result was announced, the leader column of The Irish Times stated that the electorate had fallen for an “easily sold, demagogic delusion”. It was ever thus, of course. But promises made in a general election generally have to be delivered on, or the promisor gets dumped next time around. A referendum, on the other hand, is a one-time-only deal. No comeback for those demagogic delusions.

However, a few alert souls sitting in the backseat and alert to their prospective plight, are testing the door. What if a notification made in March might later be reversed if or when those delusions come to light? What if the door were ajar and the UK later decided to remain?

That’s a question of EU law, reserved in cases where the answer is unclear to Luxembourg, and put before the court in Luxembourg by a reference from a national court. And it is possible the supreme court will make that reference.

The judges will have been encouraged by observations made by the president of the European Court earlier this week. In a wide ranging interview with London’s Financial Times, Koen Lenaerts observed there are “many, many different ways” that Brexit could end up before him.

The British high court judges, from whose decision the supreme court will hear an appeal, thought about a reference but stepped back from the brink. Even so, those judges – each an exemplar of Lord Devlin’s description of the judiciary as a “body of elderly man who have lived on the whole unadventurous lives . . . old-fashioned in their ideas” – were tarred in our print media as “enemies of the people”.

For that reason, the consensus view in the UK’s legal community is that a reference from the supreme court is politically inconceivable. “The legal reality matters not,” runs the argument. “It would be a political firestorm. The newspapers would present it as the European Court choosing whether the United Kingdom could Brexit.”

The challenges for Ireland are enormous. What does Brexit mean for the Belfast Agreement? And UK-Irish trade? How can the UK restrict free movement without a hard Border? How will Ireland police a Border that marks the edge of the single market and customs union? Ireland and the UK joined the European Economic Community together and have never lived life in it apart.

So if the UK courts will not refer the revocability of article 50 to the European Court, might the Irish courts? They could and they should.

Perhaps time will prove the Brexiteers right. Perhaps those who wail about trouble ahead will be shown to be, in the barbed language that has come to characterise UK political debate, “Remoaners”. Some magical solution to the Border issue may yet propose itself. The “sunlit uplands” promised by Leave leader Boris Johnson could still hove into view.

Then again, time may dissolve them to mere mirage. The portents are not promising.

Last week, the UK’s office for budget responsibility, an organisation with a history of over-optimistic forecasting, predicted Brexit would blow a €70 billion hole in the nation’s finances. The next day the widely respected Institute for Fiscal Studies said Brexit would see real wages lower in 2021 than they had been in 2008.

And if, in two years’ time, the evidence shows that prosperity has deserted the UK in anticipation of a hard Brexit, MPs will vote against leaving. They will vote to remain, or for a second referendum, because that is what their constituents will demand.

A decision by the European Court of Justice that article 50 is revocable releases Buzz’s sleeve from the door. He may yet jam on the brake. We came into the union together, the UK and Ireland, and with a little helping hand, together we may yet stay.

Jolyon Maugham is a barrister at Devereux Chambers in London.