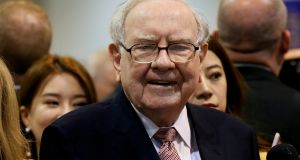 Higher payouts for claims at the car insurance company Geico were among the culprits, along with losses that Berkshire recorded as a result of its $10 billion underwriting agreement with AIG.

The Omaha, Nebraska-based conglomerate, whose collection of businesses also includes Dairy Queen, the Duracell battery company, and Benjamin Moore paints, said net income fell nearly 15 per cent from a year earlier to $4.3 billion, or $2,592 per Class A share.

Wall Street analysts had expected the company to report earnings of $2,791 per Class A share.

As well as having to pay out higher sums for injuries and property damage in the second quarter, Geico has also been attempting to gain market share by raising premiums at lower rates than some of its competitors, according to James Shanahan, an analyst with Edward Jones.

Operating earnings from Berkshire’s insurance underwriting business swung to a loss of $22 million from a profit of $337 million a year prior, while investment income generated by the unit slipped 1 per cent from a year earlier.

Berkshire’s float – the pool of insurance premiums it has amassed before settling claims – climbed $2 billion to $107 billion in the quarter. That helps fund Berkshire’s multibillion-dollar equity stakes. It currently has a $137 billion portfolio including its holdings in American Express, Coca-Cola, Apple, IBM and Wells Fargo or new acquisitions like its bid for Texas utility Oncor.

Overall, Berkshire’s operating earnings – a measure preferred by Mr Buffett that strips out investment gains and losses – fell for a third straight quarter to $4.1 billion. – Copyright The Financial Times Limited 2017