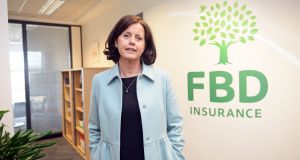 Fiona Muldoon, chief executive of FBD, has “no reason to believe” Fairfax, founded by Prem Watsa, won’t convert its €70 million bond holding in FBD into equity in 2018. Photograph: Eric Luke

Insurer FBD Holdings’ chief executive, Fiona Muldoon, sees Canadian investment firm Fairfax Financial Holdings moving next year to take a 20 per cent stake in the business as its shares hit a two-year high on Friday on the back of a solid set of interim results.

Toronto-based Fairfax, whose founder Prem Watsa is dubbed “Canada’s Warren Buffett”, bought a €70 million convertible bond in FBD in 2015 to shore up the then-struggling insurer’s finances as the industry grappled with soaring claims costs and low investment returns.

Under the terms of the deal, Fairfax can convert its bonds into equity from September 2018 if the shares remain above the conversion price of €8.50 for 180 days. Shares in FBD pierced through that level on Friday for the first time since July 2015 to reach a high of €8.60. Two years ago, analysts gave the stock little chance of reaching this level in the medium term, as they changed hands at around €6.20.

The worst is behind us. These are a good set of results

“I’ve no reason to believe they won’t convert,” Ms Muldoon said in response to questions from The Irish Times on the matter on Friday. She declined to speculate whether this may be a precursor to a change of ownership.

Ireland’s only publicly quoted insurer revealed on Friday it had swung into profit in the first half of the year, helped by the release of a €5.6 million provision previously set aside to cover its portion of an expected industry levy following the 2014 collapse of Setanta Insurance.

The Supreme Court moved in May to reject a lower court ruling in 2016 that the Motor Insurers’ Bureau of Ireland (MIBI) carry the cost of Malta-based Setanta, which only wrote business in Ireland. The Republic’s highest court has decided that the State’s Insurance Compensation Fund pick up the bill, though capped at 65 per cent of the €90 million of Setanta’s outstanding claims.

FBD delivered a €11.9 million pre-tax profit for the first half, compared to a €3.7 million loss for the same period last year.

“The worst is behind us,” said Ms Muldoon. “These are a good set of results.”

Ms Muldoon told an analysts’ briefing that “we are moving closer than I previously might have thought” to returning to dividend payments, which have been on hold since 2015.

Ms Muldoon, a former head of banking and insurance supervision at the Central Bank, took over at the helm of FBD on an interim basis in August 2015, before securing the role full-time two months later, as FBD and the wider Irish industry was in turmoil amid soaring claims and personal injury awards from the State’s courts.

FBD and other insurers have also since hiked motor premiums in an effort to return to profitability. It returned to underwriting profit last year after increasing premiums by an average of 9 per cent. Gross written insurance premium rose by 4.9 per cent in the first half of this year to €189.7 million, with average rates increasing by 5 per cent.

1 Penneys will not reopen on Monday despite expected changes to lockdown rules
2 Angela Merkel sweeps in to save the euro zone
3 In six months we will be in the grip of a 1980s-style recession
4 Cycling made easier with an Irish-made electric bike
5 Don’t expect a bonanza for Ireland from the EU’s €750bn recovery cash
6 Should my mam wait for house prices to drop before buying?
7 Pandemic payment may be tapered based on previous earnings
8 State’s tourism taskforce wants changes to school holidays to boost ‘staycations’
9 Irish company MyBio to sell 10-minute Covid-19 antibody test
10 Ryanair to process all Covid-19 refunds within 10 weeks, Michael O’Leary says
Real news has value SUBSCRIBE