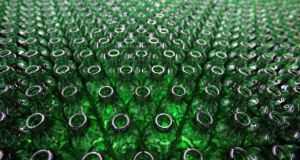 Owens-Illinois revealed to its shareholders last week it had sold the award for $155 million to “an Ireland-domiciled investment fund”. Photograph: Brendan Fitzsimons

US glass bottle making giant Owens-Illinois, which was awarded $455 million (€386 million) two years ago by an arbitration body after two of its bottle plants were seized by the Venezuelan state, has sold the disputed claim at a deep discount to an Irish-based investment fund.

Venezuela, currently the subject of a fresh bout of political unrest and violence, is seeking to have the award set aside at an international arbitration hearing next month. But Owens-Illinois revealed to its shareholders last week that it had sold the award for $155 million to “an Ireland-domiciled investment fund”.

A spokeswoman for the Ohio-based group, which is a competitor for Dublin-based Ardagh, declined to identify the fund or comment beyond the original statement when The Irish Times sought further information on the transaction.

Owens-Illinois estimates that the award is currently worth $500 million, including expenses and accrued interest.

The terms of the deal allow the US group to receive a “modest” amount of additional payments in future, depending on the fund’s ability to actually recover money from Venezuela, it said.

The use of an Irish fund highlights how Dublin’s International Financial Services Centre, helped by tax-efficient laws and plethora of professional service providers, has become a hub for both global asset managers and more esoteric hedge funds to base assets. Some €2.2 trillion of assets were contained in 6,602 funds in Ireland at the end of May, according to data from Irish Funds, the industry’s representative body.

Venezuela’s then president, Hugo Chavez, moved in October 2010 to expropriate Owens-Illinois subsidiary in the South American country as he nationalised a wide range of companies from cement makers to retail stores in a drive towards a socialist system. The previous year, Mr Chavez had seized a large tract of land belonging to Irish cardboard box maker Smurfit Kappa.

Chavez’s successor, Nicolás Maduro, has stepped up the nationalisation of businesses since he came to power in 2013, including the country’s General Motors plant in April.

Venezuela has been gripped by violence since Mr Maduro claimed victory following an election on July 31st to pick a new constitution-writing body, as electoral authorities and opponents of the ruling socialists clashed over turnout figures. The European Union has declined to recognise the result of the vote, while US president Donald Trump declared Mr Maduro a “dictator”.

The country’s contested new assembly fired its dissident attorney general, Luisa Ortega, on Saturday while Venezuelan officials said on Sunday that an “attack” by “mercenaries” at a military base in the central city of Valencia had been defeated and several people had been detained.

Meanwhile, Owens Illinois chief financial officer Jan Bertsch told analysts on a call last week that the company planned to use cash from the deal with the Irish fund to pay down debt.

“In the unlikely event that the award is partially or completely annulled, [a European subsidiary of Owens Illinois] may be required to repay up to the entire amount of the cash payment,” he said.