Mortgage arrears will be with us for some time 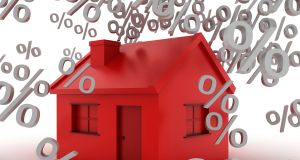 Just 381 homes were repossessed in the first nine months of last year, a drop in the ocean compared to the numbers in arrears

There is no quick-fix solution to the issue of mortgage arrears in Ireland. Latest data from the Central Bank of Ireland suggested that more than €11.3 billion worth of mortgages were in arrears of 90 days or more at the end of September 2016. In some cases the maturities are still up to 25 years out.

Some 37,185 mortgages are held by non-banks, the vast majority of which are in arrears and non-performing.

On Friday, the Irish Independent reported that Tanager, an offshoot of US private equity fund Apollo, was offering writedowns of up to 40 per cent to borrowers in mortgage arrears. But what happens if their can’t refinance? This is a distinct possibility given that their credit ratings will be shot and the mainstream banks are not minded to add to their problem loans.

Nonetheless, it highlights how private equity funds are willing to incentivise arrears customers in a bid to get a return on their money as quickly as possible. None of the funds want to hang around for 20 years or more working through these mortgage books.

Repossessing a home is not much of an alternative given the many protections now in place for homeowners and the legal hoops that have to be jumped through. It is a lengthy and costly process.

This might explain why just 381 homes were repossessed in the first nine months of last year, a drop in the ocean compared to the numbers in arrears (79,562 owner-occupied homes and 14,518 buy-to-lets at the end of last September).

The mainstream banks have been more active that private equity funds in terms of repossessions and much slower to offer write-offs or writedowns in mortgage debt for fear of moral hazard.

However, they are willing to offer restructures to mortgage arrears customers who co-operate with them. But this isn’t a sustainable position, particularly as the European Central Bank has signalled that it wants Irish banks to begin tackling their substantial non-performing loan books.

One of the peculiarities of all this is that the banks could end up selling portfolios of problem loans at a haircut to private equity funds in the next couple of years. These funds will then work through the loans, and get them to the point where they are performing again, at which stage they would probably cash in by selling them on as a job lot.

Ironically, the most likely purchasers of these tidied-up portfolios would then be the very banks who sold them in the first place.