BlackRock roars back with best first quarter in four years 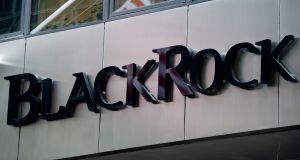 BlackRock cemented its position as the world’s biggest fund manager as assets at the New York-listed group hit $6.5 trillion (€5.75 trillion) on the back of strong market returns and renewed investor inflows in the first three months of the year.

The results, which the company said reflected its strongest first quarter for four years, give an early indication that the global asset management industry has turned a corner after a brutal 2018.

Listed investment groups saw their shares tumble almost 26 per cent on average last year – their worst performance since the financial crisis – as investors feared buoyant markets would no longer mask mounting fee pressures across the industry.

BlackRock was not immune to the malaise, with assets dipping below $6 trillion (€5.3 trillion) at the end of December. The investment group has this year trimmed jobs and reshuffled its senior management ranks. Larry Fink, the group’s chief executive, saw his pay fall 14 per cent as a result.

The impact of last year’s market tumult was apparent in BlackRock’s first-quarter results, leading to a 5 per cent year-on-year decrease in base fees to the end of March, and a 7 per cent decline in revenues to $3.3 billion (€2.9 billion), which resulted in a 1 per cent fall in diluted earnings per share to $6.61 (€5.86).

However, this comfortably beat analyst expectations of $6.13 (€5.43), and the group saw technology revenue for the 12 months to March 31st grow 11 per cent, driven by its widely used Aladdin investment platform.

BlackRock’s shares have lagged behind its rivals this year, largely because of concerns over rising fee pressures and its slowing growth rate. “First-quarter results this morning suggest those fears are misplaced with better-than-expected long-term flows . . . and a higher-than-expected fee rate,” said Michael Cyprys, a Morgan Stanley analyst.

BlackRock is in a years-long battle with Vanguard to dominate the global fund management industry, with the latter catching up fast. However, BlackRock has claimed the top spot for exchange traded fund global flows this year, which it said was driven by its fixed income products.

The iShares ETF business it acquired from Barclays almost a decade ago now manages almost $2 trillion (€1.7 trillion), which alone would make it one of the world’s five biggest investment groups.

“The breadth of our investment capabilities, spanning index, alpha-seeking, alternatives and cash, coupled with our industry-leading technology and portfolio construction capabilities, allowed us to generate strong flows and continue to meet the evolving needs of our global clients,” Mr Fink said.

The group has significantly restructured its top team in recent months, as executives tussle to emerge as the successor to Mr Fink and BlackRock seeks to inoculate itself against the industry-wide pressures.

The average expense ratio of US equity funds dipped to 0.55 per cent last year, down from 0.59 per cent in 2017, and almost half the cost charged by asset managers at the start of the millennium, according to the latest data from the Investment Company Institute.

Industry executives expect this trend to worsen in the coming years. Morgan Stanley and Oliver Wyman’s latest annual study of the asset management industry predicted that revenues from traditional, actively managed funds in developed markets will shrink 36 per cent by 2023.

BlackRock remains comfortably profitable, but to counteract these pressures it is doubling down on China. Mr Fink said that the company was in discussions with Chinese regulators over taking control of a local fund manager, and ramping up its “alternatives” business.

The Morgan Stanley-Oliver Wyman report estimates that alternative asset classes like private equity, direct lending and real estate will keep growing at a healthy clip and account for 40 per cent of all investment industry revenues by 2023.