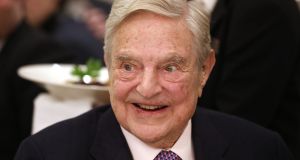 George Soros built a 3 per cent stake in GAM Holding through a subsidiary of his family office.

Billionaire investor George Soros disclosed a 3 per cent stake in GAM Holding after the asset manager lost two-thirds of its value over a scandal involving a former star bond trader.

Soros, who rose to fame with a successful bet against the Bank of England in 1992, built the holding through a subsidiary of his family office, according to the local exchange. GAM rose as much as 15 per cent in Zurich trading.

Soros’s firm joins bargain hunter Mario Gabelli in taking a stake in the Swiss firm, which is still bleeding assets after suspending star bond manager Tim Haywood last year. The company has suffered about $28 billion (€25 billion) in outflows since the scandal broke.

GAM is now reviving efforts to sell itself after previous attempts stalled, people familiar with the matter said last month. The long slump in the stock has made it a relative bargain. The company has a market value of 725 million francs (€646 million) and oversees $135 billion in assets. That means investors assign about $5 million in market value for every $1 billion the firm oversees.

Soros’s motivations aren’t clear but the investment by his family office, which oversees about $25 billion, comes at a time when speculation about mergers in asset management runs high.

Many firms are under pressure from an investor flight to cheaper, passive funds. DWS Group, the asset manager controlled by Deutsche Bank, has held preliminary talks on teaming up with firms including UBS Group, Axa and Amundi as it looks for ways to boost its size, people familiar with the matter said last month.

German insurer Allianz was also said to be interested. In the US, Legg Mason Inc is cutting 120 people, or about 12 per cent of staff, and streamlining its executive committee after adding activist investor Nelson Peltz to its board. The firm had been on an acquisition spree in recent years, adding affiliates QS Investors, Martin Currie, Rare Infrastructure, Clarion Partners and a stake in Precidian Investments. – Bloomberg