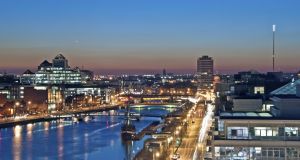 The Central Bank has received 100 licence applications from firms in Britain wanting to set up management companies or Mancos in Dublin. Photograph: iStock

Hubs in Ireland set up by asset management firms in Britain wanting to avoid any business disruption from Brexit could become employment magnets due to regulations saying they must be substantially staffed, an industry body said.

The Central Bank of Ireland (CBI) has received 100 licence applications from firms in Britain wanting to set up management companies or Mancos in Dublin to avoid the UK’s departure from the European Union affecting cross-border business.

The applications are also being scrutinised by the European Securities and Markets Authority or ESMA, an EU regulator, to check they have sufficient “substance” or number and seniority of staff to avoid them becoming a “letter box” or empty shell.

Irish hubs are authorised by the Central Bank.

“The number of people mandated by the regulator for Brexit-related authorisations was a fairly significant increase on previously authorised entities,” said Kieran Fox, director of business development at Irish Funds, which represents the €2.9 trillion Irish funds sector.

Mancos authorised before ESMA’s Brexit guidance did not need full-time employees. Hubs being set up due to Brexit, however, need the equivalent of two or three full time staff, rising to 7-15 staff for a mid-sized Manco, Irish Funds said.

“Anecdotally, we have seen a few of the new entities filling some positions with Irish expats moving back to Ireland,” Mr Fox said.

The Central Bank makes a determination on a case-by-case basis and said it is reviewing rules it introduced in 2018 for ensuring that fund management companies have sufficient resources to meet their obligations. It is expected to conclude sometime in the second half of 2020.

“Our understanding is that the Central Bank of Ireland will want to see pre-existing structures come up to similar levels as the Brexit-related structures,”Mr Fox said.

UK-based asset managers already accounted for about 36 per cent of the total number of managers of Irish-domiciled funds, an indication of the number of UK firms that could face having to bulk up on staff in Ireland. – Reuters

1 47,000 homes need to be built each year to solve housing crisis, report says
2 Jervis shopping centre takes major tenants to court over rent disputes
3 Digital pollution: ‘We have a pandemic of data and 90% of it is crap’
4 How Argentina and its creditors thrashed out a $65bn deal
5 Seán FitzPatrick makes fresh bid to secure planning for new Greystones home
6 Hairdressing 7% more expensive in July as prices declined across economy
7 Can Covid free your workplace of bureaucracy?
8 Energia’s owner ‘plans to sell it later this year’ in deal worth €2bn
9 Dogpatch Labs and SOSV shortlisted to win NDRC contract
10 Cisco sales warning raises spectre of broad IT spending decline
Real news has value SUBSCRIBE